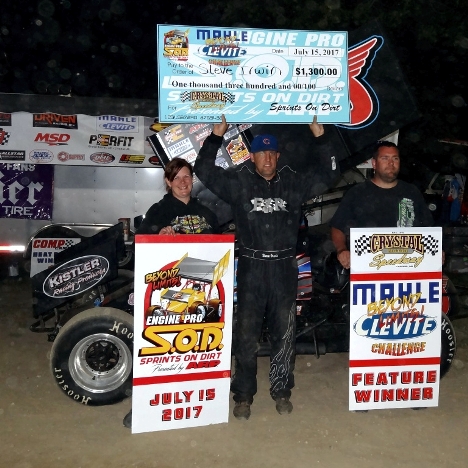 Starting outside, front row, the Fenton, Michigan, SOD point leader took the lead at the start over pole starter Brad Lamberson.  Irwin maintained a small lead for five laps before 2015 SOD champion Gregg Dalman charged around Lamberson and then Irwin for first.  Dalman was clearly the class of the field and opened up a commanding lead.  Meanwhile, Jay Steinebach’s hard work paid off as he grabbed second from Irwin and began closing in on Dalman who had to contend with heavy traffic as the race wound down.

Steinebach was just four car length behind Dalman when he made hard contact with the outside wall at the flag stand completing lap nineteen.  Steinebach ended up against the wall facing turn four with a flat right front tire bringing out the caution flag and ending his impressive drive.

With five laps to go, Dalman had early leader Irwin behind him and things dramatically changed.  It was clear that Dalman’s handing had gone south as Irwin charged into the lead and drove away.  Dalman continued to struggle as first Thomas Schinderle, then Shawn Valenti passed him also.  Schinderle narrowed Irwin’s lead and pulled alongside the leader once, but it was a wakeup call for the leader as he opened up a small lead and was in complete command at the end.