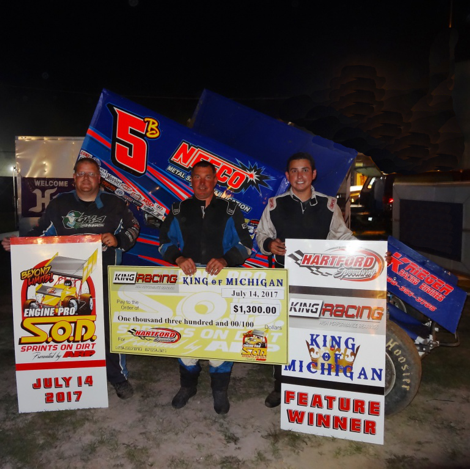 Chad Blonde picked up his fourth Engine Pro Sprints On Dirt presented by ARP feature win of 2017 Friday night. It was his second King Engine Bearings King of Michigan series win at Hartford Motor Speedway and gives him a commanding lead in the KoM points.

Delta Ohio’s Shawn Valenti took the lead over pole-sitter Linden Jones at the start of the feature from the outside front row before Mark Aldrich took over second.  Then leading SOD sprint car rookie Andrew Scheid climbed the wall in turn three as the leaders completed lap one; with his car staying upright, Scheid slid along the top of the wall before dropping off the back of the wall and coming to a stop with what appeared to be nothing more than two bent front radius rods.  Before another lap could be completed, Robert Huisken and D. J. Lamance tangled in turn three with Huisken flipping hard.  Both drivers were okay, but their cars sustained heavy damage.

Back under green, Valenti held a small lead over Aldrich until Ryan Ruhl took over second on lap 5, and a lap later, Blonde moved into third from his seventh starting spot.  Blonde took second place on lap 7, then a caution for Austin Nemire’s shredded left rear tire on lap ten gave the leaders a clear track.  A crowd-pleasing battle followed, as Blonde pulled alongside Valenti twice, but Valenti found his groove and began opening up his lead.  However, the leaders got into traffic again on lap fifteen.  Valenti struggled with lapped cars and on lap 19, Blonde took the lead and drove away.  Ryan Ruhl charged into second on lap twenty-one as Valenti continued to have trouble in heavy traffic.  Blonde then cruised to a fifteen car-length over Ruhl and Valenti.