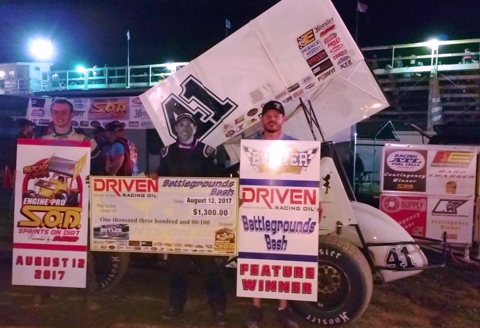 Schinderle (Berkley, MI) not only picked up his first sprint car feature win, but also the $1,000 check as the 2017 Driven Racing Oil Battlegrounds Bash points champion.  He started the night in fourth place in the points, but a combination of several factors, including his stellar performance, propelled him to the championship.  Joe Swanson, Chad Blonde, Jay Steinebach, and Steve Irwin will also share in the point fund payout.

It was the “younger generation” in the front row to start the feature, thirteen-year-old leading SOD sprint car rookie of the year candidate Andrew Scheid (Sparta, MI) started from the pole.  Butler competitor nineteen-year-old Quentin Blonde (Litchfield, MI) started outside front row.  After a first lap caution for a Tony Bures spin, Scheid took the lead on the start and looked like anything but a sprint car rookie.

On lap five Joe Swanson (Etna Green, IN) used his experience to grab the lead from Scheid.  Swanson looked fast, but sixth place starter Thomas Schinderle drove by Swanson, winner of the second Driven Racing Oil Battlegrounds Bash race, on lap 9 after a crowd-pleasing back and forth battle.

Once out front, Schinderle skillfully worked his way through traffic and maintained a small lead over Swanson.  For a lap twenty-one restart, Chad Blonde had moved into third and all eyes were on him as the race went green.  Schinderle and Swanson were up to the challenge though.  Blonde’s charge ended as he ran over the top of turn three, losing six places.