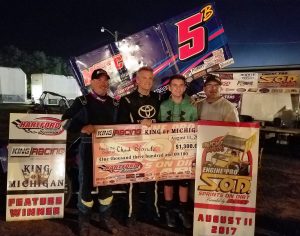 The large crowd was treated to an impressive display of masterful driving as Blonde charged from his eighth starting position and had little trouble with lapped traffic on the wide, expansive track.  Blonde took the lead from Linden Jones on lap four and drove away from the field.  He was chased to the checkered flag by Ryan Ruhl who took second from Steve Irwin on lap 17.  Ruhl was also impressive as he ran the entire race on seven cylinders, losing a cylinder at the start of the feature.  SOD championship point leader Irwin finished third.  The caution-free feature was completed in just five minutes and twenty-five seconds with only seven cars finishing on the lead lap.

Blonde is perfect in the three King Engine Bearing KoM races so far in 2017 and also won the last SOD race on the old Hartford track configuration last year.  He was also the fastest overall qualifier and heat race winner.  His three wins give him a commanding lead in the King Engine Bearing King of Michigan point standings over Steve Irwin, Gregg Dalman, Thomas Schinderle, and Linden Jones.

The Lane Automotive/MSD Ignition Fast Masters also won their respective heats with Blonde in the Engler Machine & Tool heat, Joe Swanson in the COMP Cams heat, and Ryan Ruhl in the RockAuto.com heat.