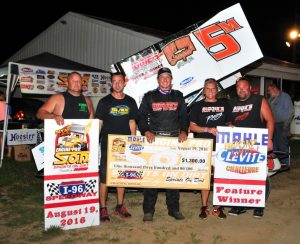 Stambaugh charged to the lead from his outside front row starting position over pole starter Brian Smith and never looked back as he set a torrid pace on the superbly prepared track. Brad Lamberson, in the Melling Performance Parts, Smith Motorsport #71H, charged past Smith to take over 2nd and had plenty of speed, but Stambaugh had built up a straightaway lead. The race ran caution free until disaster struck on lap 22 when Lamberson, John Gall, and Doug Zimmerman all flipped violently at the entry of turn three. All three cars were destroyed, but after the track safety crew meticulously evaluated the drivers, all were cleared. Back under green, the 25 lapper was quickly completed.

Mark Aldrich suffered a cut right rear tire while lining up for the feature and had to go to the work area and change the tire. As a result, he had to start last in the feature and charged to a 4th place finish.