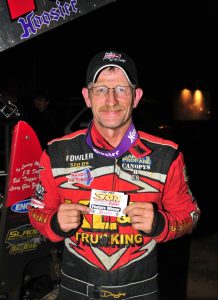 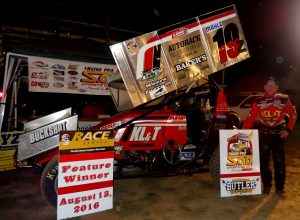 In spite of nearby rain and surrounded by threatening weather, the Engine Pro Sprints On Dirt by ARP Butler Bash ACL Race Series High Performance Engine Bearing drew a full field of competitors and thrilled fans with a typically exciting SOD program.  The feature line up was led by a couple drivers who likely have the most combined win and championships in the Butler Speedway sprint division, Doug Zimmerman and Ken Mackey. Making them more formidable was the fact that Mackey won the regular Butler show last week and Zimmerman finished second.

Mackey jumped into the lead at the start and held a narrow margin over Zimmerman for two laps until Zimmerman made a turn four pass to take the top spot and begin to pull away.  While Zimmerman was flying in his customary high groove, Mackey tried to find a quicker line.  Mackey’s night ended a few laps later when he pulled to the infield with mechanical woes.

Zimmerman was flying high and opening a full straightaway lead as seventh place starter Ryan Ruhl suddenly was in second and when Zimmerman slipped of the top of three and four, Ruhl jumped into the lead as Zimmerman lost several positions.  Now Ruhl appeared to be in command, holding a several car length lead over Zimmerman who had worked his way back up to second.  Then, on lap twenty, the caution flew for the first time due to debris on the track.  The ensuing restart had Zimmerman right on Ruhl’s rear bump, and on lap twenty-three Ruhl slipped high in turn two, allowing Zimmerman to pull even with his. As the leaders charged through three and four, they touched and Ruhl spun to a stop off of turn four.  Ruhl was able to restart at the rear, but Zimmerman drove off to the impressive SOD Butler Bash ACL Race Series Bearings feature win and the $1,700 SOD / ACL Bearings / Steve Smith & Robert Flannigan Big Money check.

As has been the norm in every SOD show under the new, beyond limits package on SOD’s Hoosier spec tires, close competitive racing and few cautions highlighted the racing.