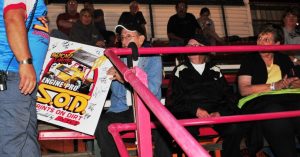 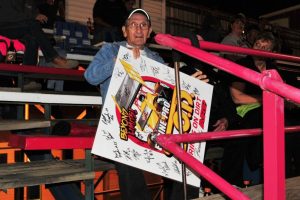 At each Engine Pro Sprints On Dirt presented by ARP event, SOD gives a 24” x 24” sign of the SOD logo autographed by all drivers to one carefully selected recipient.  Referred to as “We are SOD,” to sign was originally intended to be given away through a drawing.  It was decided, though, not to give it to someone who was lucky enough to win a drawing, but to some who is perhaps not so lucky.  While We are SOD has very little monetary value, we hope that it is priceless in the hearts of its recipients.

Up until our August 19th SOD show at I-96 Speedway, We are SOD has been awarded to young recipients, but thanks to a suggestion from Mike Mouch and I-96 Speedway, it went to someone just a little older, Wayne Landon who was born in 1931.

It is a safe bet that many people do not know who Wayne is, but if you have been around open wheel racing in Michigan long enough, you know him.  Wayne has over 300 feature wins, at least 15 championships, and has raced at over 50 different tracks in the US and Canada.  Wayne is a member of the Michigan Motor Sports Hall of Fame.  Please take the time to read Wayne’s MMSHoF biography at http://www.mmshof.org/inductees/wayne-landon/.

Wayne’s story is much bigger and more tragic than is normally seen in a racing family.  About fifty-seven years ago it was Wayne who was racing when a wheel flew off his car and into the stands, killing his young daughter, Rita.  Thirty-seven years ago, his second son, Terry, was killed in a highway crash. Then, in 1989, Wayne Landon and his wife Ruth were in the stands at Kalamazoo Speedway and saw the crash that caused the death of their oldest son Jerry.  Jerry was racing a mini-champ car when the car in front of him spun out of control, clipped his car and sent it flying head-on into a retaining wall.  You can read the report of Jerry’s death at http://articles.latimes.com/1989-05-02/sports/sp-2547_1_mel-kenyon-tragedy-hits-racing-family-veteran-race-driver.

Wayne has been a major player in Michigan oval track racing, and who could be more deserving of receiving We are SOD.  SOD is proud to honor Wayne Landon as one of our own.