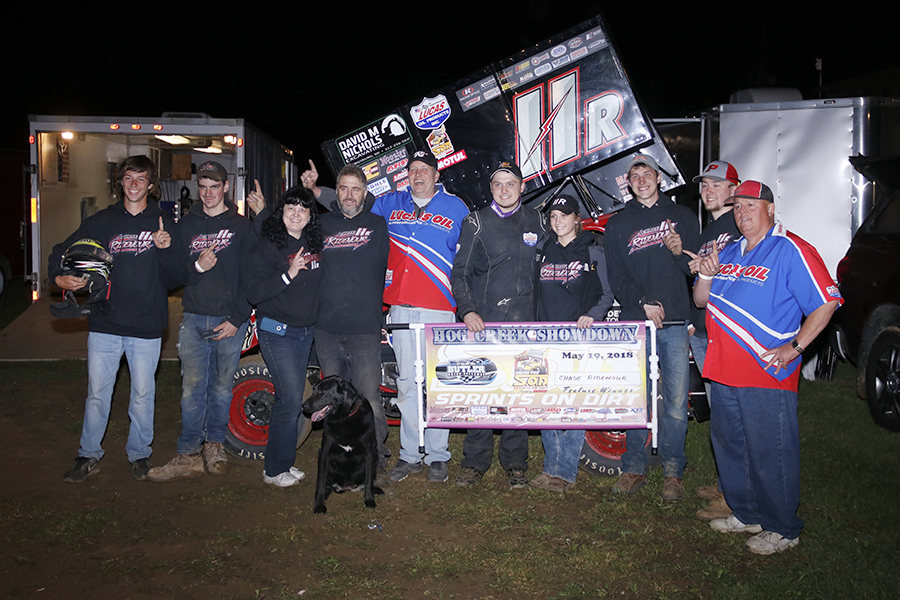 The winning Ridenour team by Johnny B Imagery

ERIE, MI (May 20, 2018) – “Kid Rocket” Chase Ridenour, from Perry, Michigan, used a lot of speed and a little luck to win the much-anticipated Hog Creek Showdown at Butler Motor Speedway Saturday night.  The first appearance of the Engine Pro Sprints On Dirt presented by ARP at Butler saw a huge crowd enjoy great racing while many other speedways suffered rain outs.

With twenty-seven cars, competition was stout in the B-main to make the feature.  Brad Lamberson, Mark Aldrich, Thomas Schinderle, Ricky Ferkel, and Justin Ward transferred to the feature.

Ridenour, in the seat of his father’s Maxim, worked his way from his fifth starting spot to second, and on lap six after a brief caution, charged around early leader Boston Mead.  Mead did his best to retake the lead, but Ridenour eventually drove off, leaving Mead to finish second.  Ridenour sliced through traffic and opened up his lead until lap 23 when disaster nearly struck.  Ridenour had to take evasive action to avoid a lapped car in turn four that got out of shape and, in spite of contact, kept his cool and his lead over Mead.  Ridenour then charged to the win followed by Mead, Chad Blonde, Shawn Valenti, and Dan McCarron.

Brad Lamberson, in the Kirkendall GFI, charged from the sixteenth starting spot to finish seventh, earning the KSE Hard Charger Award.  Joe Swanson had a frustrating night, dropping out of the feature early, earning the Allstar Performance Better Luck next Time Award.  Josh Turner and Ryan Ruhl saw decent runs evaporate when they had to go to the work area for tire changes.