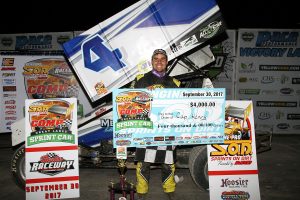 Henry started 4th and wasted little time getting to the front, taking the lead on lap 3.  Henry drove to victory over Ryan Ruhl and Jordan Ryan.  While Henry looked untouchable, Ruhl was closing in on the leader quickly at the end, but ran out of laps.  Ruhl dropped to seventh from his fifth place starting position, but came to life late in the 30 lap feature and finished just 0.6 seconds behind Henry.  The only caution came out on lap 11 for a Thomas Schinderle flat tire; he rejoined the field after changing the tire.  2017 SOD Sprint Car Rookie of the Year Andrew Scheid finished 7th to win the KSE Hard Charger Award for advancing 7 positions.

Heat races were rough.  Veteran Mark Aldrich caught the front straightaway wall in the 1st heat and did a series a hard flips to put an end to his night.  Jared Horstman clipped a turn 3 tire marker in the 2nd heat and flipped, bringing his night to an end.  In the 3rd heat, Brett Mann made hard contact with a tire marker in turn 2, destroying his #19.  All drivers were okay.

The CCGLSCC closes an exciting 2017 Engine Pro Sprints On Dirt presented by ARP season.  Next on tap is the 2017 awards banquet that will be held Saturday, November 11 at the Battle creek Holiday Inn, Battle Creek, Michigan.