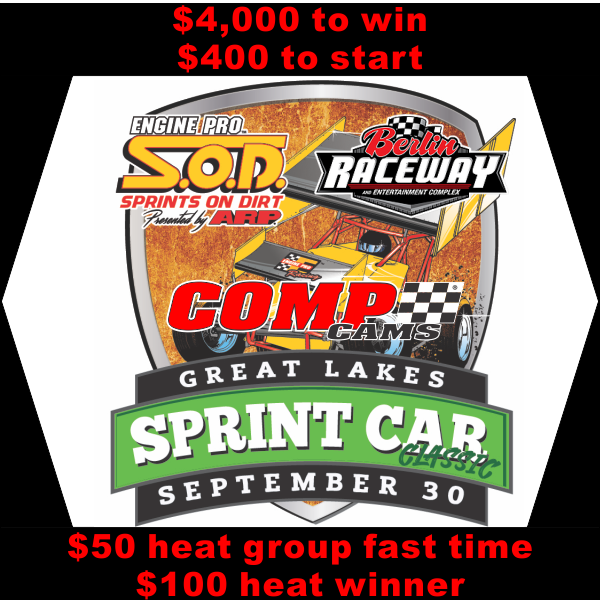 Engine Pro Sprints On Dirt presented by ARP returns to the most unique venue it has ever raced at.  Michigan’s renowned Berlin Raceway, a leader among paved short tracks, is being transformed into a dirt track for a few, select races this fall.  Saturday, September 30, the raceway will present SOD’s COMP Cams Great Lakes Sprint Car Classic.

COMP Cams, a 2017 SOD heat race sponsor partner, has signed on as title sponsor of the Great Lakes Sprint Car Classic.  The thirty lap feature will pay $4,000 to win and $400 to start.  As with all SOD shows, Engler Machine & Tool, COMP Cams, RockAuto.com, Jim Coffey & Son Plumbing & Heating, and Engine Pro will pay $100 to each heat race winner.  Lane Automotive and MSD Ignition will pay $50 to the fast qualifier in each heat group.  $1,500 in contingency cash and awards will be available to competitors.

Berlin Raceway’s storied 67-year history and SOD’s status as the nation’s most progressive and recognized regional sprint car series promise to make the race an event fans won’t want to miss.  The Classic will be part of an event that includes Michigan’s three leading dirt series, Sprints On Dirt, the American Ethanol Late Model Tour (AELMT), and the American Ethanol Modified Tour (AEMODT).

When it comes to oval track racing in Michigan, Berlin Raceway’s story is right at the top.  In 1951, it was born as an oval dirt track located within the Berlin Fairgrounds.  1966 saw the track paved as a 7/16 mile asphalt oval track.  In 2012, Berlin Raceway returned to its roots, covering the asphalt with clay and turning the track into a dirt track for the month of September.  In 2013, 2014, and 2015, Berlin Raceway again hosted September dirt track racing.  This will be SOD’s third race at Berlin with previous appearances in 2013 and 2014.