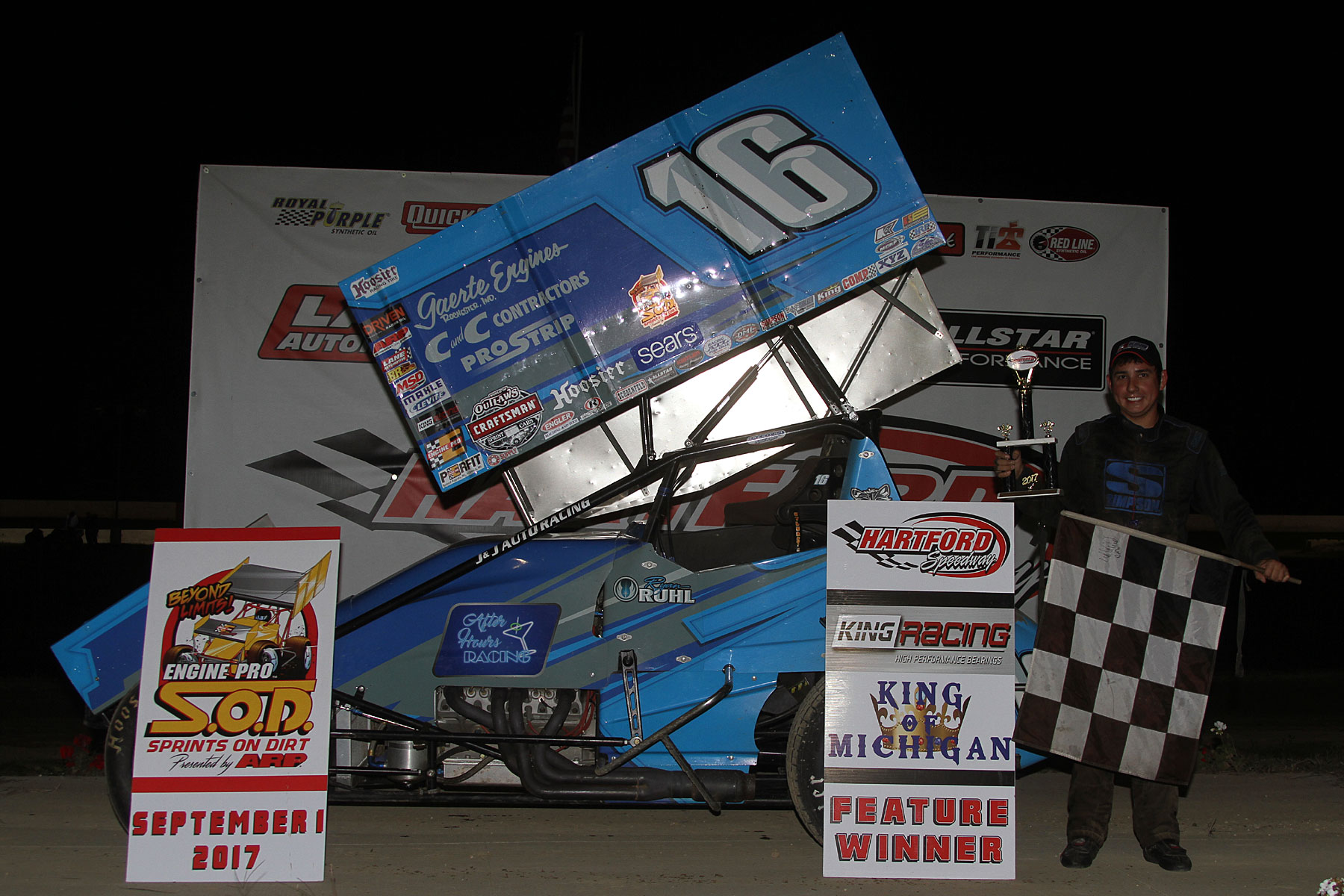 Ryan Ruhl (Coldwater, MI) charged from the 8th starting position to win the King Engine Bearings King of Michigan finale at Hartford Speedway last night.  The race brought the curtain down on the last race for Engine Pro Sprints On Dirt Presented by ARP at Hartford Speedway.

Ruhl’s win came after he took the lead from race leader Steve Irwin (Fenton, MI) on lap 10, but it wasn’t an easy win.  12th place starter Chad Blonde (Litchfield, MI), winner of the three previous King Engine Bearings KoM took 2nd on lap 16, then the lead on the next lap.  Ruhl wasn’t to be denied and charged back around Blonde on the next lap.  While it looked like everything was settled, Irwin found new speed and battled back and forth with Blonde for 2nd.  Irwin took 2nd on lap 22, but lapped traffic in his low groove forced him to check up, and Blonde drove around the top back into 2nd. Ruhl held on to take the action-packed 25 lapper over Blonde and Irwin.

Ruhl advanced 7 places in the feature, and Blonde advanced 12 places.  However, Brett Mann showed the most muscle by advancing from 19th to a 4th place finish, winning the KSE Racing Products Hard Charger Award at +15.  Irwin was the fastest car for several laps late in the race.

King Engine Bearings made it possible to take the SOD King of Michigan to a new level as a four-race mini-series instead of a single race.  Hartford Speedway’s Tim and Leah Dibble and their entire staff gave competitors a great race track that culminated with an excellent program and one of the season’s best features with action and passing everywhere.

Going into the 2017 SOD final points race tonight at Crystal Motor Speedway, Andrew Scheid will be the 2017 Perfit Corporation Sprint Car Rookie of the Year; Scheid’s feature ended early on the hook with a flat right front tire.  Thomas Schinderle has a lock on the 2017 Perfit Corporation Series Car Rookie of the Year; Schinderle drove to an 8th place finish after an early race spin.