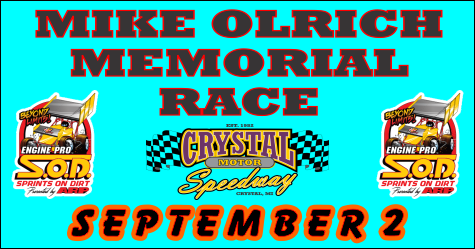 The race will be the final points race of the Engine Pro Sprints On Dirt presented by ARP season.  Currently, Steve Irwin (Fenton, MI) holds the SOD Championship point lead over Thomas Schinderle and Gregg Dalman.  The SOD champion will have a guaranteed starting position in SOD’s season finale, the COMP Cams Great Lakes Sprint Car Classic at Berlin Raceway on September 30th.

The 30 lap Mike Olrich Memorial Race will honor the memory of former Sprints On Dirt official and series director Mike Olrich who was very congenial and well-liked by everyone in the series.

Professionally, Mike was a greenhouse researcher at Michigan State University.  His work lives on through a complex computer-based tool that he co-authored that provides assistance to flower growers in production scheduling.  Mike was a dedicated family man who always found time to be deeply involved coaching youth sports.  Michael Steven Olrich, passed away suddenly August 3, 2013, at the age of 43.  SOD continues to operate with the honesty and integrity Mike was known for, and honors him every year with the Mike Olrich Memorial Race.

Check out www.enginepro.com, and ARP at www.arp-bolts.com.  For Sprints on Dirt points, events, rules, current news, and other information go to www.sprintsondirt.com.