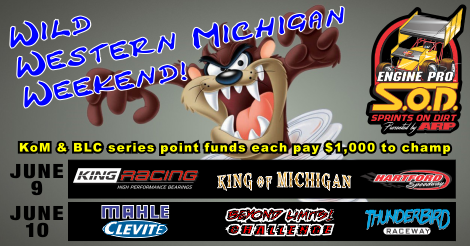 Engine Pro Sprints On Dirt presented by ARP is gearing up for a big weekend, kicking off the King Engine Bearings King of Michigan series at Hartford Speedway Friday, then the second race of the MAHLE/Clevite Beyond Limits Challenge Saturday at Thunderbird Raceway.

Friday’s race at Hartford Speedway will be the first of SOD’s four-race King Engine Bearings King of Michigan series at the speedway.  The KoM includes its own point fund with $1,000 going to the champion.  SOD competitors can’t wait to get their first look at Hartford’s newly reconfigured 3/8 mile track.

Saturday’s race at Thunderbird Raceway will be the second race of the five-race 2017 MAHLE/Clevite Beyond Limits Challenge.  Unlike the King of Michigan series, the Beyond Limits Challenge will be contested at five different speedways.  Delta Ohio’s Shawn Valenti leads the BLC points over Joe Swanson, Etna Green, Indiana, and Landon Simon, Indianapolis, Indiana.  The BLC also includes its own point fund with $1,000 going to the champion.  The ¼ mile, nearly circular track, is a favorite of SOD competitors, producing excellent racing last season.