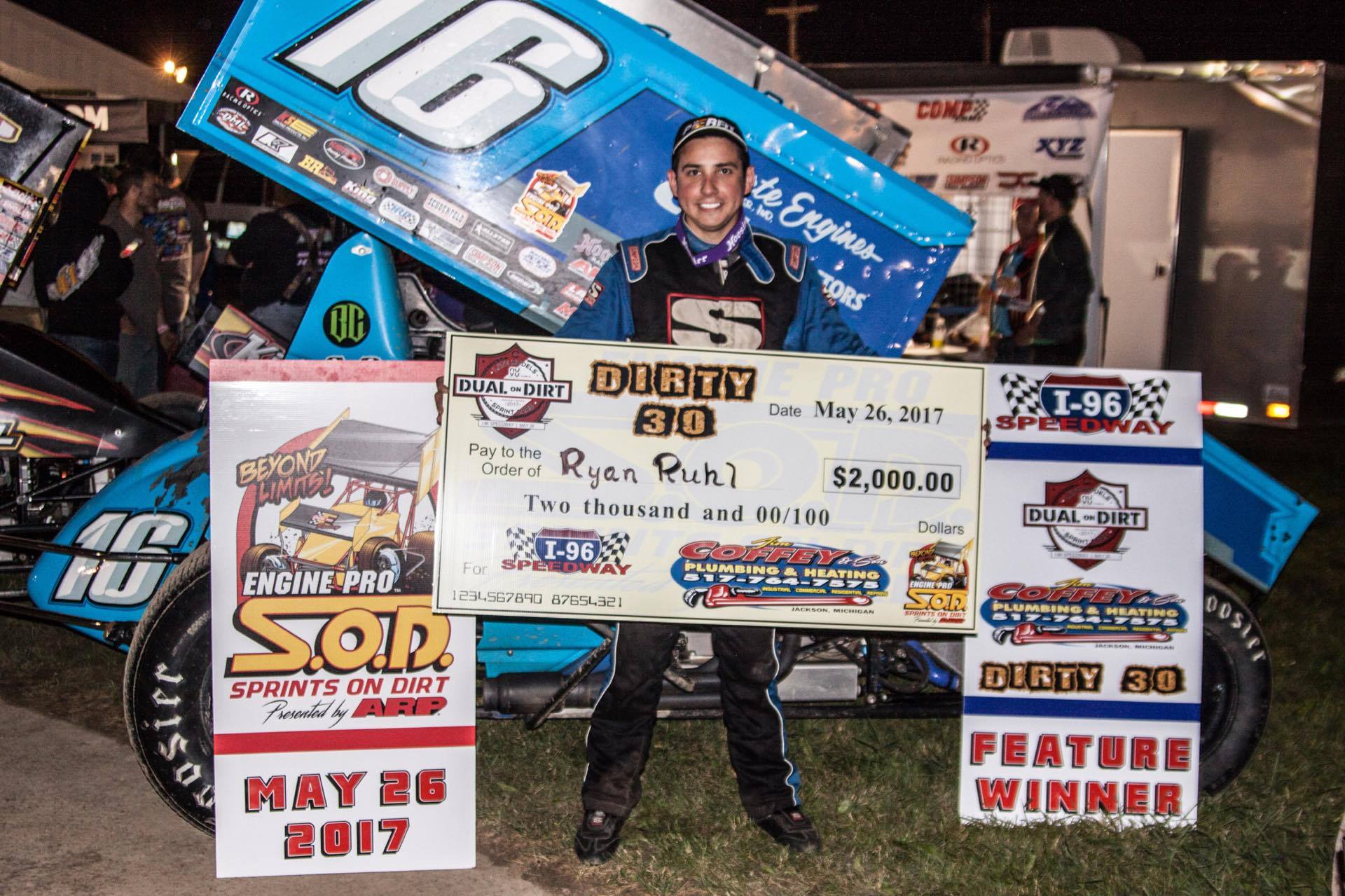 On a night when rain was a persistent threat, Ryan Ruhl drove to the win in the Engine Pro Sprints on Dirt presented by ARP Jim Coffey & Son Plumbing & Heating Dirty 30 portion of the NUVU Fuels Dual On Dirt.  Ruhl mastered the 26 car field by being the fastest overall qualifier, dominating the Engler heat, and taking home the SOD Big Money check of $2,000 for winning the feature.

Although rain wiped out several other Michigan race events, it didn’t stop I-96 Speedway’s near-capacity crowd from the rare opportunity to see two headline classes, the Engine Pro Sprints on Dirt presented by ARP and the American Ethanol Late Model Tour in one event.  The show was a real crowd pleaser as light rain fell for hours during the program, but never enough to stop the action.

Ruhl, in his familiar blue #16, showed his strength early, being the Lane Automotive/MSD Ignition Fast Master in the Engler Machine & Tool Heat group.  He then drove from his 4th place heat race starting position to an easy win.  Not to be outdone, Chad Blonde showed his strength by taking the COMP Cams heat.  Steve Irwin took the RockAuto.com heat from 3rd.

Eric Smith suffered mechanical woes early in the program as did Brad Lamberson and Thomas Schinderle keeping them out of competition.

Gregg Dalman took the early lead in the feature over pole sitter Chris Jones.  By lap 6, Chad Blonde was on the move taking 2nd and setting sail after Dalman.  Blonde took the lead on lap 12 and looked like the car to beat.  Dain Naida spun off of turn four on lap 15 just after moving into the top 5 from 10th.  At half way it was Blonde, Dalman, Ruhl, Boston Mead, and Joe Swanson.  Two laps later, Chris Jones race ending when he flipped off the back straight. A lap later, Ruhl, who started 9th, snatched the lead from Blonde. Brett Mann spun in turn 4 on the next lap and rookie Andrew Scheid was collected by Mann and flipped hard, ending a frustrating night for him.  After refueling during the red for Scheid, Steve Irwin, who was in 4th, dropped out with engine problems.  Back under green, Ruhl charged to win with Blonde staying within striking distance, but not able to mount a serious challenge.