This weekend is the much anticipated season-finale weekend for the unlimited sprint cars of the Engine Pro Sprints On Dirt presented by ARP at Hartford Speedway and Crystal Motor Speedway.

This Friday, September 2nd, SOD rolls into Hartford Speedway for the last time in 2016.  On May 20th, the SOD season opened at Hartford Speedway after two rain outs at Crystal Motor Speedway.  It was Hartford’s first race of the season on the widened track and SOD’s first race under the new, unlimited sprint format. With all the wild rumors and predictions that nothing but a 410 cubic inch motor could win under the new SOD rules, everyone was watching.  Ryan Ruhl quickly shattered the 410 myth by dominating the feature in his 360 on SOD’s biggest, fastest speedway.  Brian Smith, running a twenty year old 410 that has no horsepower advantage over current top-line 360s ran a solid second.  The new SOD Hoosier spec tires performed flawlessly, as they have all season, and competitors were very comfortable on them.

The final race of the Engine Pro Sprints On Dirt presented by ARP takes place Saturday, September 3rd at Crystal Motor Speedway where SOD has raced every year since its first season in 1980.  This is the biggest, most prestigious race of the season, the Nitro Black Mike Olrich Memorial Race in support of Racing Awareness.com.  As if that wasn’t enough, it will also be the last race of the MAHLE/Clevite Beyond Limits Challenge.

The 30 lap Nitro Black Mike Olrich Memorial Race in support of Racing Awareness.com will pay $2,000 to win and $400 to start.  Heat races will pay $100 to win and $1,500 in sponsor contingencies will be distributed to competitors.

Mike Olrich is a former Sprints On Dirt official and series director who was very congenial and well-liked by everyone in the series.  Professionally, Mike was a greenhouse researcher at Michigan State University.  His work lives on through a complex computer-based tool that he co-authored that provides assistance to flower growers in production scheduling.  Mike was a dedicated family man who always found time to be deeply involved coaching youth sports.  Michael Steven Olrich, passed away suddenly August 3, 2013, at the age of 43.  SOD continues to operate with the honesty and integrity Mike was known for, and honors him every year with the Mike Olrich Memorial Race. 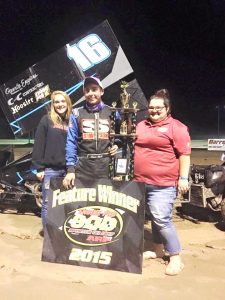 Engine Pro/Nitro Black is taking the opportunity to promote the efforts of Racing Awareness through the memorial race. Engine Pro’s entire VIP admission of fifty guests has been donated to the charity through the cooperation and generosity Crystal Motor Speedway owner and promoter Ron Flinn.

The Nitro Black Mike Olrich Memorial Race will determine the 2016 MAHLE/Clevite Beyond Limits Challenge champion.  Brian Smith currently holds a 49 point lead over Steve Irwin in BLC points.  The top 16 drivers still have a mathematical chance of winning the championship.

Last but not least, this weekend’s action will determine the 2016 Engine Pro Sprints On Dirt presented by ARP champion.  Brian Smith has a 91 point lead over Steve Irwin followed by Mark Aldrich, John Gall, and Brett Mann.  Only Irwin, Aldrich, and Gall have a mathematical chance at the championship.