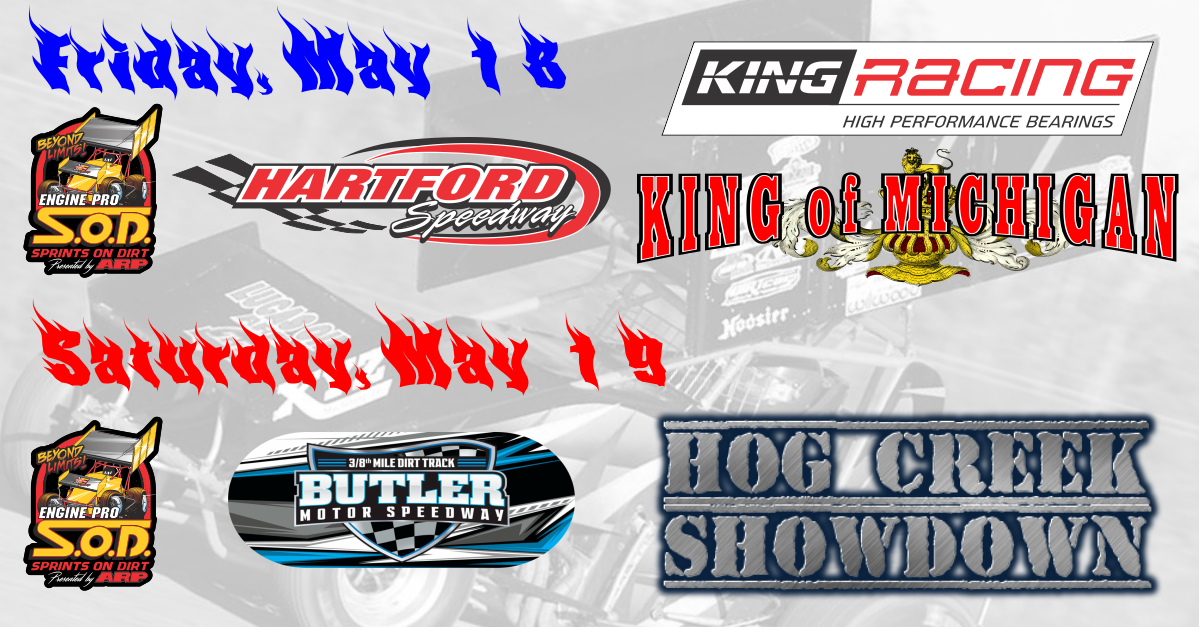 ERIE, MI (May 13, 2018) – Thanks to a little mischief by Mother Nature yesterday, Engine Pro Sprints on Dirt presented by ARP competitors will do battle in two big races this Friday and Saturday.

This year, with King Engine Bearings returning as the KoM title sponsor, the series has expanded to five races.  The KoM opens on May 18, followed by June 8, July 6, July 27, and the finale on August 31.

All SOD races award competitors at least $2,033 in cash and contingency awards.  Friday’s KoM, however, will add as much as $1,200 more.  The Lane Automotive Heat Race Challenge will award all heat race winners a special prize package worth over $300 including product certificates from Lane Automotive, Allstar Performance, QuickCar Racing Products, Holley, MSD Ignition, and Royal Purple Lubricants. Special winner’s hats as well as additional apparel items will also be a part of the package. Images of winners will be featured on social media from participating partners as well as on the track pages.

The 2018 KoM Champion will be crowned at the series finale on August 31.  The champion will have a guaranteed starting spot in the Engine Pro Sprints On Dirt presented by ARP Mike Olrich Memorial Race at Crystal Motor Speedway on September 1st.  The King Engine Bearings King of Michigan will pay a point fund to the top five at the 2018 Awards Banquet.

Butler vs. SOD Hog Creek Showdown – After being washed out last week, the much anticipated four-race Butler Motor Speedway/Engine Pro Sprints On Dirt presented by ARP Hog Creek Showdown kicks off this Saturday.  Many SOD drivers will get their first laps on the newly reconfigured home of weekly sprint car racing in Michigan.

The race will be the last 2018 Motul Leader of the Pack Stage 1 race.  The LoP consists of four stages including all SOD races through September 1.  Each stage finish is based on SOD points earned during the stage.  The Motul Leader of the Pack Champion will be the driver with the best average finishing position for all stages and will pay a five-place point fund at the 2018 Awards Banquet.

The 2018 Hog Creek Showdown Champion will be crowned at the series finale on August 4.  The champion will have a guaranteed starting spot in the Engine Pro Sprints On Dirt presented by ARP Mike Olrich Memorial Race at Crystal Motor Speedway on September 1st.  The Hog Creek Showdown series will pay a point fund to the top five at the 2018 Awards Banquet.

Butler Motor Speedway and Sprints On Dirt are working together to ensure a strong future for sprint car racing in Michigan.  In a move that is sure to benefit fans and competitors alike, Butler has reduced the track banking by about one-third and widened the racing surface over the offseason.

For more information about Butler Motor Speedway, go to www.butlerspeedway.net and the speedway’s Facebook page at https://goo.gl/csxUkX.