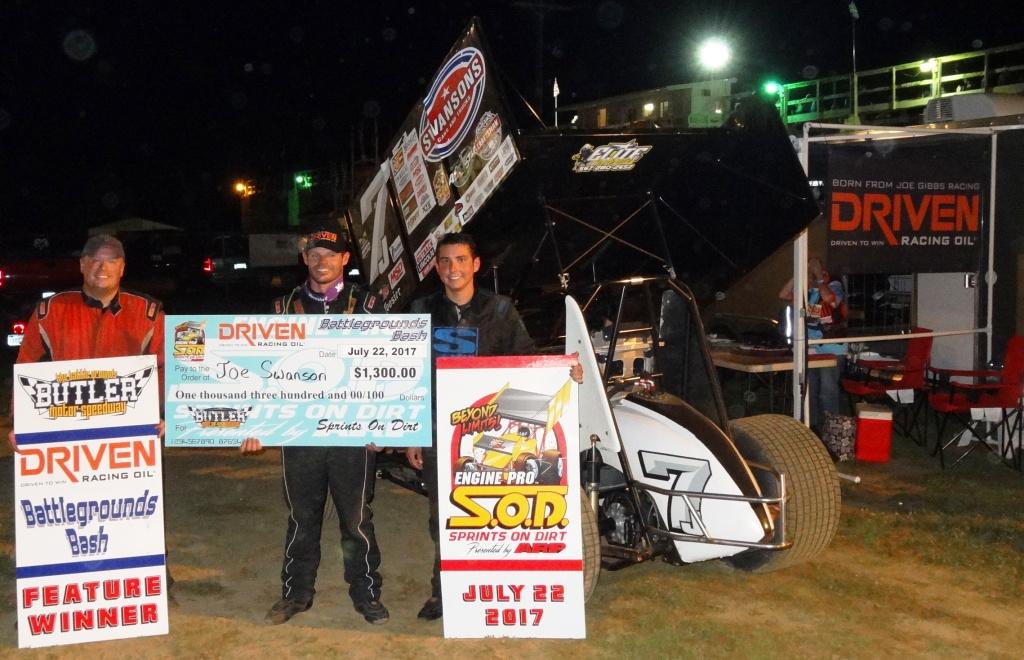 Swanson (Etna Green, Indiana) started from the pole, but a lap one red for a Shebly Bilton and Andy Chehowski crash on the back straightaway, and a quick caution for Tyler Bearden’s spin halted action quickly.  Once back under green, Swanson took the lead over Tim Evilsizer.  Boston Mead took 2nd on lap 7, then Steinebach took the spot on the next lap.  Steinebach was getting faster as Swanson battled traffic and on lap 16 he shot by the leader and opened up a small lead.  On lap 18 the caution flew for Tyler Rankin’s spin.  Steinebach held the lead in spite of heavy pressure from Swanson through lap 22 when the caution came out for Doug Zimmerman’s spin.  Swanson charged into 1st on lap 23 and led the final 2 laps to win the epic battle.

COMP Cams heat race winner Boston Mead suffered a broken rocker arm at the end of his heat race and SOD point leader suffered the same fate while leading the Engler Machine & Tool heat.  While it looked like both drivers were done for the night, they borrowed the parts needed to run the feature and their perseverance paid off.  Mead started 3rd and finished 4th.  Irwin started 22nd and charged to a 6th place finish, easily winning the KSE Hard Charger Award.

The SOD program was completed with typical SOD efficiency through the combined efforts of SOD competitors and Butler Motor Speedway officials.

Get to know Driven Racing Oil at http://www.drivenracingoil.com.  For more information about Butler Motor Speedway, go to www.butlerspeedway.net.