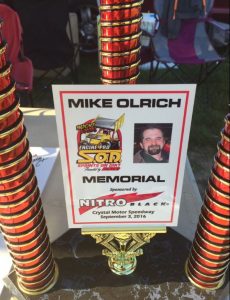 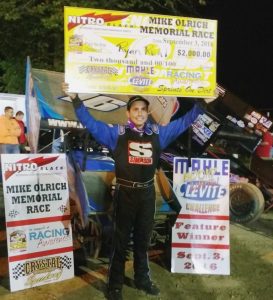 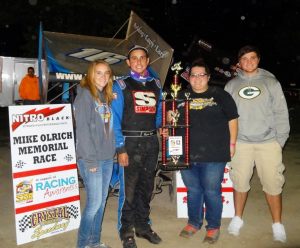 Ryan Ruhl dominated the Engine Pro Sprints On Dirt presented by ARP Nitro Black Mike Olrich Memorial Race in support of Racing Awareness.com at Crystal Motor Speedway.  The memorial race was the most prestigious event and final race of the Sprints On Dirt season, and the championship race of the MAHLE/Clevite Beyond Limits Challenge five-race mini-series.

Ruhl led all 30 laps of the non-stop feature in front of a very large and enthusiastic crowd.  Friday’s SOD Hartford winner Chad Blonde took over 2nd on lap 15, but Ruhl had a full straightaway lead.  Blonde was a tick faster than Ruhl the last few laps, but not enough to get close to the leader.  Ruhl also won the 2015 Mike Olrich Memorial at Crystal.

Brian Smith drove a steady race to finish 6th and secure the 2016 Engine Pro Sprints On Dirt presented by ARP Championship, the MAHLE/Clevite Beyond Limits Challenge, and the 2016 RockAuto.com SOD Series Rookie of the Year. 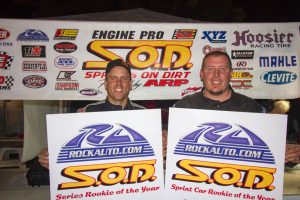 RockAuto.com Rookies of the Year Brian Smith and Justin Ward