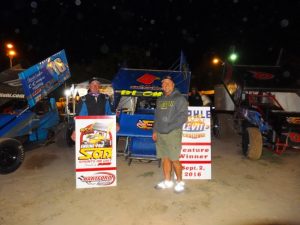 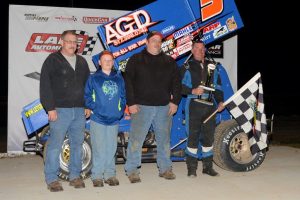 Linden Jones and John Gall led the start of the 20-lap feature with Gall jumping into the lead for the first 2 laps before Jones took over for laps 3-4.  On lap 4, SOD points leader Brian Smith escaped disaster when Joe Swanson climbed up his left rear going into turn one bringing out the race’s only caution. Both cars sustained damage, but restarted after repairs in the pits.  Early leaders John Gall, Linden Jones, and Mark Aldrich, as well as SOD Hartford May winner Ryan Ruhl proved to be no match for Blonde who drove away and finished with a commanding lead over Ryan Ruhl and Steve Irwin.  Blonde’s victory was his first appearance with SOD in several years, and he found the highly-acclaimed 2016 SOD spec Hoosier tires to his liking.

Robert Bulloch suffered a mechanical failure in his Kirkendall 7K that sent him hard into the water barrels in turn four in the first heat.  His car was launched high into the air upon impact and although the car was destroyed, Bulloch was eventually cleared by the track medical crew.  The proper installation of the car’s seat and belts prevented potentially serious injuries in this high-speed, heavy-impact crash.