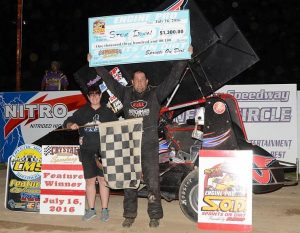 Stevie Irwin (Fenton, MI) finally got the monkey off his back, and mastered rush-hour traffic to take home the exciting Engine Pro Sprints On Dirt by ARP feature win at Crystal Motor Speedway (Crystal, MI) Saturday night.  Irwin started in 2nd place along SOD points leader Brian Smith on the front row, and chased Smith in the early stages of the race.  While Smith ran the middle groove and higher, Irwin eventually found the bottom to his liking.  As has been commonplace with SOD races having very few cautions in 2016, lapped traffic was heavy for the leaders.  Both Smith and Irwin made heart-stopping, crowd pleasing passes.  Initially it looked like Smith would cruise to his 4th win, but Irwin settled into his low-rider mode and started reeling in the leader, eventually catching Smith on lap 14.  The capacity crowd then got their money’s worth as the two traded the lead back and forth until Irwin finally took command for good.  While Smith continued within striking distance of the leader, it was clear that handling was going away on his 2+.

The race was interrupted only once, on lap 11, when Tom Schinderle, running 9th, hit the wall and came to a stop with a flat right rear tire.  Jay Steinebach had nowhere to go and came to a stop to avoid Schinderle’s car at the bottom of the track at the start/finish line.

Smith appeared to have a tire seal over, and while doing his best to hold onto a good finish, he bounced off the front straight wall.  Although the tire didn’t immediately go flat, his right rear wheel was about 3-4 inches narrower after the impact.  He held on, going one lap down on the last lap to finish in 10th place.

Irwin, who splits his time racing winged and non-winged sprints, has won non-winged races this season, but has struggled, for the most part, with wings.  Well aware of his issues, Irwin has focused on finding and fixing his issues.  While he struggled Friday at Winston Speedway, it was clear that he found the right combination for Crystal.

Irwin finished the race with a good-sized lead, followed by Dustin Stroup in 2nd, Shawn Valenti in 3rd, Dan McCarron in 4th, and Dain Naida in 5th.

Friday’s winner at Winston Speedway, Stuart Brubaker, was disqualified for the remainder of the show after an on-track incident during the COMP Cams (3rd) heat race.  Mark Aldrich, currently 3rd in points, lost ground to the front runners when a flat tire in the B main kept him from advancing to the feature.

The Crystal show added another gold star to the 2016 Engine Pro Sprints On Dirt by ARP season under the new SOD unlimited format on the new Hoosier spec tires.  Good car counts, very competitive racing, plenty of side-by-side racing, multiple racing grooves, and very few cautions, mostly due to mechanical issues have been the hallmarks of every show without exception; SOD races have won high praise from competitors and fans alike.