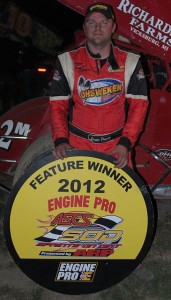 The two drivers that raced for the win one year ago on Labor Day weekend at Crystal, Andy Teunessen and Davey Brown, started on the front row.  After a raged start Brown and Jared Horstman made contact with Brown spinning to the infield with suspension damage and Horstman suffering a flat left rear tire.  Horstman was able to change the tire while Brown retired pit side.

Tuenessen was also penalized one row for jumping the start, putting Daggett and ASCS SOD point leader Gregg Dalman on the front row.  Daggett pulled away at the start with Dalman and Ryan Ruhl keeping pace.

On lap four Greg Wheeler brought out the caution flag when he slid off the track in turn four.  During the restart Daggett and Dalman pulled away from the rest of the field.  Just as the lead duo started to catch up to slower cars Joe Geibe spun in turn four.

With one lap car between first and second, Daggett opened up a half straighaway lead over Dalman.  By lap 21 Daggett entered heavy slower traffic and Dalman began to close.  Daggett was able to negotiate the slower cars and motored to the win over Dalman, Ruhl, Ryan Grubaugh, and Brett Mann.