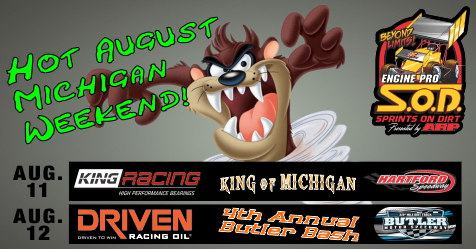 Engine Pro Sprints On Dirt presented by ARP is getting prepped for SOD’s “Hot August Michigan Weekend,” the first of two consecutive two-day weekends that will have a major impact on not only the SOD season championship, but all three of the season’s mini-series also.

On Friday, SOD rolls into Hartford Motor Speedway for the King Engine Bearings King of Michigan third race of the four-race series.  Chad Blonde was the winner of the first two King of Michigan races and has a commanding KoM point lead over Steve Irwin, Thomas Schinderle, Chris Gurley, and Gregg Dalman.

Once this weekend is over, competitors will have to quickly get ready for the “Michigan MegaWeekend” on August 18th for the MAHLE/Clevite Beyond Limits Challenge championship at the Manistee County Fairgrounds and August 19th for the Allstar Performance Open Wheel Spectacular at Merritt Speedway.  The Merritt race will be SOD’s milestone 900th race.