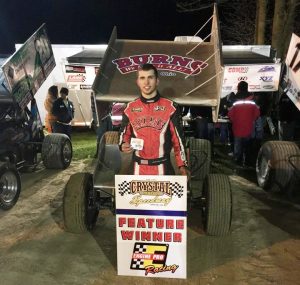 On a cold, windy Michigan night, the action was hot for the Engine Pro Sprints On Dirt presented by ARP season opener at Crystal Motor Speedway as Castalia, Ohio’s Jordan Ryan led green to checkered for the win.  Ryan, in a 410, won over Matt Foos in a 305 normally driven by Kelsey Ivy.  Foos stayed within striking distance of Ryan all race long, but never had a chance to challenge the leader.  Dain Naida, started 5th and appeared to get better as the race went on, and took 3rd from Max Stambaugh at the finish.  After a brief caution for a spin on lap 2, the next 23 laps went nonstop.

SOD competitor Mark Aldrich started the night off in an exciting way doing a series of flips in turn four during qualifying.  The damaged parts were quickly replaced, and Aldrich transferred to the feature through his heat race, but retired early, finishing in 19th place.