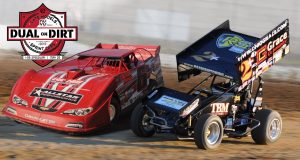 For the first time ever, Michigan’s two premier racing series, the American Ethanol Late Model Tour and the Engine Pro Sprints on Dirt presented by ARP, will join forces to present MIchigan race fans with a spectacular dual race program.  The NUVUfuels Dual on Dirt will be run at I-96 Speedway on Friday, May 26.  For the full Dual on Dirt story, go to www.motorcityracing.co/dualondirt.

The AELMT portion of the Dual kicks off its 2017 season headlined by the Yellow Hose 40.  The AELMT made two appearances at I-96 in 2016.  2010 DIRTcar Racing UMP Late Model National Champion Rusty Schlenk was victorious in both shows

The SOD portion of the Dual will be headlined by the Dirty 30.  In SOD’s lone appearance at I-96 last year on August 20th, “Mad Max” Stambaugh won over 2016 SOD Champion Brian Smith and Stevie Irwin.

Dual on Dirt event sponsor NUVUfuels, LLC is dedicated to advancing biofuel production by implementing management, energy efficiency, technology and operational improvements. Get to know them at www.nuvufuels.com and on Facebook at www.facebook.com/nuvufuels.