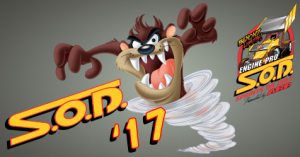 The 2017 Engine Pro Sprints On Dirt presented by ARP season is fast approaching, and racers and fans alike are chomping at the bit!  The success of the beyond limits rules and Hoosier spec tires has resulted in no equipment or tire changes for the new season, so racers can focus on an action-packed season loaded with high-profile races.

Three Mini-series in 2017
The ever-popular MAHLE/Clevite Beyond Limits Challenge will once again be a highlight of the 2017 schedule.  The granddaddy of SOD’s three 2017 mini-series, the BLC’s five races at five different speedways present competitors with a real challenge.

New for 2017, the Driven Racing Oil Battlegrounds Bash will give Butler regulars and SOD competitors an opportunity to face off against each other during all three SOD races held at Butler Speedway.  The races will be held on three weekends that draw broad interest since two are during the Michigan International Speedway NASCAR weekends and the other during the MIS Faster Horses Festival weekend.

Also joining the BLC in 2017 will be the King Engine Bearings King of Michigan series.  Traditionally a prestigious single race event, the KoM has been expanded to include all four 2017 SOD races at Hartford Speedway.  Engine Pro Sprints On Dirt presented by ARP races have been Hartford’s most popular races over the last three years, and the new Hartford track configuration are sure to be spectacular crowd pleasers.

The MAHLE/Clevite Beyond Limits Challenge, the Driven Racing Oil Battlegrounds Bash, and the King Engine Bearings King of Michigan will each have a separate point fund and will pay each champion $1,000.  Each champion will also have a guaranteed starting spot in the Mike Olrich Memorial Race on September 2 at Crystal Motor Speedway.

2017 SOD race dates
The season will open on April 29th at the traditional home of the SOD season opener, Crystal Motor Speedway.  While SOD newbies initially find the track easy to figure out, by feature time, it is a different story, and those with experience over SOD’s 37-year history at Crystal have an advantage.  The race has a May 6 rain date.

SOD competitors jump from the frying pan into the fire on two new tracks holding two mini-series point races on the May 19 and 20 weekend.  Friday, May 19, the first of four King Engine Bearings King of Michigan series races will have SOD invading the drastically reconfigured Hartford Speedway 3/8 mile track for the first time.  The next night, Saturday, May 20, the MAHLE/Clevite Beyond Limits Challenge opening race will have SOD headlining the history making opening of the newly built ¼ mile dirt oval at Baer Field Motorsports Park in Fort Wayne, Indiana.  Baer Field has set a Sunday, May 21 rain date for the race.

On Friday, August 4, SOD returns to the Manistee County Fairgrounds after a long absence during its Onekama Days for the MAHLE/Clevite Beyond Limits Challenge Championship race, paying racers $350 to start.  A week later, Friday, August 11, the third race of the King Engine Bearings King of Michigan series takes place at Hartford Speedway.  Saturday, August 12, Butler Speedway the Driven Racing Oil Battlegrounds Bash Championship race will be held on the second day of the annual Butler Bash, during the last 2017 MIS NSASCAR weekend.  Saturday, August 19, SOD will head north again to Merritt Speedway for the Allstar Performance Open Wheel Spectacular.

Friday, September 1, Hartford Speedway, Hartford, MI, King Engine Bearings King of Michigan culminates with its championship race.  The season-long points chase will end at Crystal Motor Speedway on September 2nd with the Mike Olrich Memorial Race.  The 2017 Engine Pro Sprints On Dirt presented by ARP season will end on Saturday, September 30, at Berlin Raceway.  The state’s nicest paved short track, Berlin will once again lay clay over the pavement.  Competitors will race for $2,500 to win, $400 to start, and the top 3 in 2017 SOD points guaranteed feature starting positions.