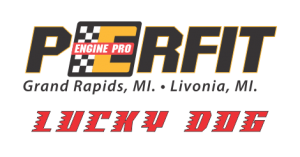 ERIE, MI (January 27, 2017) – The Perfit Corporation has joined Engine Pro Sprints On Dirt presented by ARP as sponsor of the Perfit Lucky Dog Award that will awards one lucky driver $100 from a random draw of all competitors at every SOD race in 2017. The award is a long-time favorite of competitors, often surprising them with a little extra cash at the end of a SOD race.

The Perfit Corporation is part of the largest engine parts network in the country, Engine Pro, servicing Michigan, Indiana and Ohio from its Grand Rapids, MI; Livonia, MI; locations.  The Engine Pro network of 35 distribution centers provides engine builders and machine shops across the country with a full line of brand name internal engine components.

The Perfit Corporation has been the primary engine parts supplier for hundreds of automotive machine shops in the Michigan, Ohio, Indiana region for more than 30 years. It has built its business on outpacing its competitors, including online-only retailers/vendors.

The Perfit Corporation has the right people. Its salespeople know what they are talking about. Many have raced in the past or are currently competing at the street, drag and circle track level. Most have been with Perfit for more than 20 years.

The Perfit Corporation supports racing at the grass roots level. The Engine Pro brand is front and center not only with Engine Pro Sprints On Dirt presented by ARP, but at numerous of local tracks and racing venues across the Michigan, Ohio, Indiana region.

Meet The Perfit Corporation at www.perfitenginepro.com. To learn more about Engine Pro, go to www.enginepro.com. For more information about ARP, go to www.arp-bolts.com. Follow SOD on Facebook at www.facebook.com/sprintsondirt.