Well-meaning people had genuine concerns about how the tires would impact sprint car racing.  There were also a few self-proclaimed experts who loudly predicted dire consequences.  Some people viewed Hoosier’s task as simple, others as complex, and others as impossible.  The world of sprint car racing took notice as SOD quickly became a major topic of discussion.

While there were several objectives to be achieved, a few were key to success.  Hoosier had to design and build a right rear tire and a left rear tire that would equalize competition between different size engines, maintain competitiveness of races, and maintain the appearance of sprint car tires that fans were familiar with.  The resulting right rear tire was slightly shorter than commonly used right rears, and both tires were a little narrower.  The compounds of the spec tires are not excessively hard as some people expected them to be. 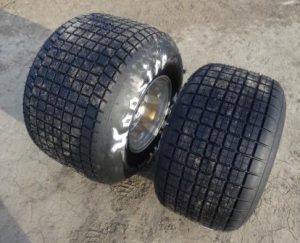 In just the very first race of the season, most tire concerns were emphatically crushed.  One prediction was that there was no way anything but a current 410 cubic inch engine could win.  However, a 360 engine was driven by Ryan Ruhl to a convincing win on the biggest, fastest track on the SOD schedule, Hartford Speedway.  Emphasizing the equality achieved, Brian Smith finished second with a twenty year old 410 -12 motor.  The next day, Smith won with a dramatic finish line pass of Doug Zimmerman’s 410 at Butler Speedway.

Most 2016 races were won by 410s.  If engine equality was achieved, this was to be expected since most competitors ran 410s.  But among the 410 wins were four by previous generation motors.  Three by Brian Smith’s 410 -12 that, as dyno testing shows, has no horsepower advantage over current, high dollar 360s.  At Crystal Motor Speedway, Stevie Irwin won with his 410 -12×12 motor and Dustin Stroup finished second with his 410 -12 motor.

Ryan Ruhl had two convincing wins with his 360 as well as a second in only four SOD races.  Although there were no 305 wins, there easily could have been if not for late race cautions on a couple occasions; 305s did have second and third place finishes.

Competitors quickly adapted to the new tires.  Contrary to predictions of terrible drivability, all races were run with very few cautions and exciting side-by-side racing unmatched in previous years.  Success of the unlimited format was very evident as fan enthusiasm and support grew throughout the season. 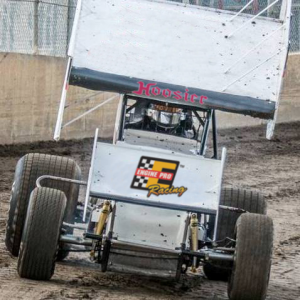 The initial shock of no longer being able to make large stagger changes worried many competitors.  It didn’t take long, though, for them to discover that they could race just as well, maybe even better, without the added expense of several different left rear tire sizes.  Ironically, while some competitors ran as much stagger as they could achieve, others ran equally well with the least stagger.

With just one right rear tire and one left rear tire, a racer was on par with every other competitor.  2016 Engine Pro Sprints On Dirt presented by ARP Champion Brian Smith said: “They made forward bite difficult to achieve without sacrificing side bite, which made it easier on engines and closed the gap on cubic inch differences.”

Another popular myth that was busted was the perceived benefit of running narrower wheels.  Hoosier advised competitors to stick with 17” right rear and 15” left rear wheels for optimal performance.  Some competitors purchased and ran narrower wheels, but quickly set them aside.  All 2016 races were won utilizing 17” and 15” wheels.

Another significant impact of the spec tires was making the driver a more significant factor in race performance.  Brian Smith’s smooth, consistent driving style paid big dividends under the SOD unlimited format on the Hoosier spec tires.  His earlier comment about forward bite versus side bite echoed the comments of Stevie Irwin and Ryan Ruhl during preproduction testing in September 2015.

SOD spec tires performance characteristics were excellent.  Tire wear and performance drop-off were much less than anticipated.  Tire durability was exceptional.  Just like any other racing tire, tire management was important.  With the smaller contact patch of the spec tires, excessive tire heat was a legitimate concern, but unless underinflated beyond acceptable limits, there were no issues. 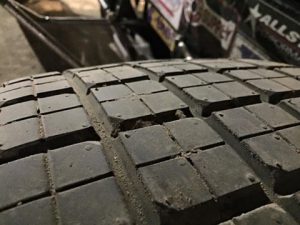 Left rear after a full night and 25 lap feature on a ½ mile track. 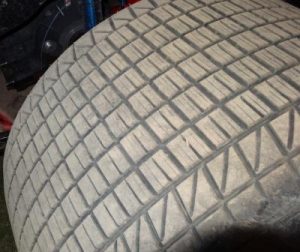 Hoosier Racing Tire was up to the task of meeting SOD’s objectives and then some.  The price of the tires was generally 10% lower than non-SOD tires.  Brian Smith’s opinion of the tires was: “I’m really happy with the performance and price of the SOD spec tires. They held up very well and we were able to run them multiple times with little drop off.”  Stevie Irwin said: “Yes sir …old 12 engine perfect for this series…limited tires equal the playing field.”

Now, with a full season behind the new Hoosier SOD spec tires and literally every concern about them put to rest, the future looks bright.  Smith summed up the new spec tire package this way: “Overall I think it’s a huge step in making sprint car racing better and more competitive.”  We agree.