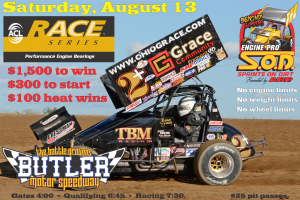 Camping for the weekend is $25.00.  The band Flyte will be playing both nights of the Butler Bash.

This will be the second appearance of the unlimited SOD sprints at Butler this season. Brian Smith won the first show with an exciting finish-line pass of Doug Zimmerman on May 21.

ACL Race Series Performance Engine Bearings will be the SOD feature sponsor for the Bash.  Located in Grand Rapids, Michigan, ACL Race Series Performance Engine Bearings are recognized as a premier brand throughout the motorsports world. Race Series rod and main bearings are standard components in race engines that have set records and won championships from Mexico to Bonneville. They are used extensively in the US. and Canada and are the overwhelming choice of racers and engine builders worldwide. The unique combination of design, metallurgy and engineering provides Race Series performance bearings with the endurance and capability to perform where others cannot. These exceptional bearings are available for a variety of American, Asian and European performance engines.