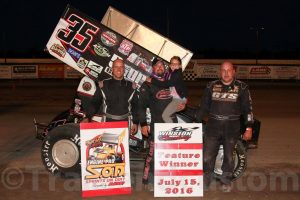 Gregg Dalman grabbed the lead at the start from the pole with Brett Mann looking like he may have something for the leader.  Dalman started to pull away as Mann slipped high on turn 2 allowing Chris Pobanz to take 2nd and Stuart Brubaker 3rd.  Dalman looked to be the class until John Gall & Jay Steinebach tangled on lap four with Gall flipping.  Neither driver was able to continue.

After the red, Dalman continued to lead, but it soon became evident that the handle was going away on Dalman’s car and after a back and forth battle, Brubaker got by Dalman as he slid high in turn two.  Brubaker was an expert at negotiating traffic on the slick surface and easily held on for the win.  After the 4th lap red, the feature went nonstop and point leader Brian Smith was turning faster laps than the leader at the end, but it was too little, too late.