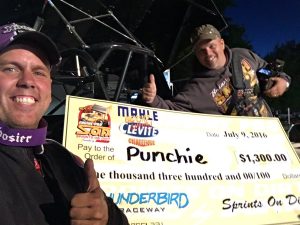 Brian “Punchie” Smith took his 3rd SOD feature win in Saturday’s Engine Pro Sprints on Dirt presented by ARP victory in the MAHLE/Clevite Beyond Limits Challenge 25-lap feature at Muskegon’s Thunderbird Raceway.  Before a standing-room only crowd, it didn’t take long for outside front row starter Steve Irwin (Flying Zero) to open a lead on pole starter Mark Aldrich (1a).  Irwin set a torrid pace that quickly got him into lapped traffic early in the race that had only caution, on lap 3, when mechanical gremlins brought Jay Steinebach (10s) to a stop in turn 2.

Meanwhile SOD point leader Punchie (2+) worked his way up to 2nd from his 5th place starting position and set sail for Irwin.  While traffic helped his pursuit of Irwin, it also created a couple of close calls, and Smith noticeably became more cautious.  Lap 13 proved to be unlucky for the leader when he got boxed in and Smith finally made the pass for the lead he would hold until the finish.  In spite of searching for quicker line around the almost circular track, Irwin (0) was not able to catch Smith and finished 2nd.  Tom Schinderle (41) finished 3rd and Dain Naida (17X) 4th after a nearly race-long spirited battle with 5th place finisher Dan McCarron (22M) in which McCarron thrilled the crowd with an all-out attempt to take over the spot.  19 cars started the feature and 18 finished clearly thrilling the enthusiastic crowd.

Fastest hot lap times were posted by a 305 driven by Dundee, Michigan’s Dan McCarron.  He was followed by two 360s, Dain Naida (Tecumseh, MI) and Alex Hill, the Six Nation Sensation, from Wilsonville, Ontario.  They were followed by the 410 of feature winner Brian Smith from Fremont, Ohio, and the 360 of 2015 SOD champion Gregg Dalman from Bellevue, Michigan.

The top 3 heat race finishers were paired up with kids for the License 2 Play Feature Draw to determine the first 9 feature start positions. 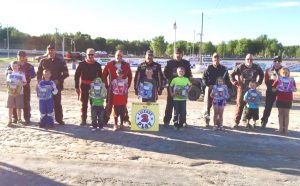 Racing with SOD at Thunderbird Raceway were lady competitors Lexi Adgate and Alex Hill.  Both have had successful mini-sprint careers and are now ready to show the boys they can do the job in full size sprints.  Hill passed the most cars in the feature.