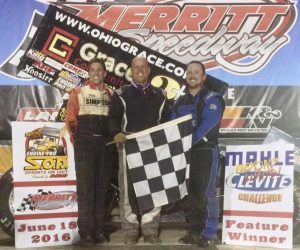 Erie, Michigan (June 19, 2016)- Joshua Turner jumped out to an early lead after starting on the front row with Steve Irwin for the first round of the MAHLE/Clevite Beyond Limits Challenge for the unlimited sprints of the Engine Pro Sprints On Dirt presented by ARP at Merritt Speedway Saturday night.  However, it only took fourth place starter Brian Smith from Fremont, Ohio, a couple laps to reel in Turner and charge into the lead.  Smith steadily built up a straightaway lead as he soon got into lapped traffic on the racy quarter mile.  In spite of being the last of seven features run on the track, the track was dust-free and with plenty of passing with the 2016 SOD spec tire that continue to impress everyone.

Smith, ran a very smooth, consistent race, masterfully handling lapped cars.  As the race approached midway though, Dan McCarron started turning faster times and closed the gap on Smith to several car lengths when the red flag flew with only five laps to go in the 25-lap main event.  Joshua Turner (4T) and Nic Rogers (81x) tangled in turn one, both flipped hard and collected Steve Irwin (0) in the melee.  Irwin made repairs and restarted, but Turner and Rogers were finished for the night.

With the green flying once again, Smith had a clear track while McCarron had to take evasive action to avoid a lapped car, and was passed by #41 Thomas Schinderle.  The caution flew one last time for a spin two laps later.  On the restart, once Schinderle disposed of a lapped car, he started closing the gap on Smith, but time ran out, and Smith scored his second SOD victory in a row.  The enthusiastic crowd was treated to Smith’s victory dirt angel after his win.

The new Sprints On Dirt spec Hoosier Racing Tire rear tires produced exciting racing, engine equity, and stiff competition among racers regardless of engine size on the quarter mile Merritt track in spite of hot, sunny weather and a seven division program. Smith’s 410 won, Schinderle was second in a 305, McCarron was third in a 305, and Mike Astrauskas finished fourth in a 360.