The sportsman of the year award does not receive the recognition it deserves. The award goes to the SOD driver who best exemplifies the basics of sportsmanship.  Adults and children alike  who see a driver behaving in a sportsmanlike way come to understand that the real winners in racing are those who know how to persevere and to behave with dignity — whether they win or not.  Veteran SOD competitor Mark Aldrich won the 2015 Sportsman of the Year Award.

It is readily seen who the winning driver is for each race, but what did it take to win?  There are very talented crew chiefs that know their drivers and equipment, and make crucial changes and adjustments that result in wins.  Two-time SOD champion Gregg Dalman’s son, Keegan Dalman, received the 2015 Crew Chief of the Year Award.

XYZ Machining owners Tim and Cindy Norman have been a part of SOD since 1984.  Tim, who started his career as a sprint car driver in 1983, was SOD rookie of the year in 1984, and won his first Sprints On Dirt championship the next year.  He then went on to win two more SOD championships in 2005 and 2007 and collected over 40 career feature victories during his career.  Tim was inducted into the Michigan Motor Sports Hall of Fame in 2012. 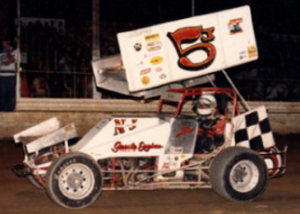 Tim Norman in his familiar 5J

XYZ Machining produces CNC manufactured aluminum and titanium racing components, as well as custom products for other industries, that are sold worldwide.  If you race a sprint car, it is a good bet that you use XYZ parts, either with XYZ’s own name on them or the name of one of many leading sprint car racing manufactures that XYZ produces parts for.

To learn more about XYZ Machining, go to www.xyzmachining.com.