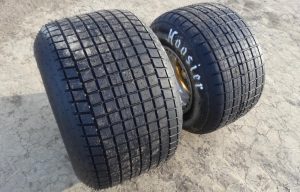 Erie, MI (May 31, 2016) – Last September, when SOD announced its new Hoosier spec tires, there were numerous dire predictions of disaster and mayhem.  Now that a week has gone by since the opening races, one on the biggest, fastest track and the other on a high banked 3/8 mile, how did the predictions fare?  Well, not very well, actually terrible!  Not one of the negative predictions came close to becoming reality.

The fast-car dash on the big, fast Hartford Speedway was an exciting duel between Brian Smith’s 410 and Ryan Ruhl’s 360.  They raced side by side racing, Ruhl passed Smith for the lead, but a bobble out of turn 2 gave Smith a final shot at regaining the lead and he took advantage of it and drove off to the win.  The feature quickly put to rest the prediction that a 360 wouldn’t beat a 410 regardless of the tires.  Once again, contrary to popular opinion, Ruhl’s 360 not only won, but dominated the caution-free race.  Then, at Butler, 410s finish first and second, but a 360 finished third, passing more cars that anyone else in the feature.  It does appear as if SOD has delivered engine parity as promised.

Both nights had exciting racing and did not deliver on the prediction that racing on the new tires would be full of crashes.  Drivers quickly adapted to the new tires and became comfortable with them.  Originally leery of the new tires, numerous drivers gave rave reviews after using them.

Consistent with what Hoosier Racing Tire and SOD had told racers all along, the top finisher both nights opted to use standard right rear (17”) and left rear (15”) wheel widths even though some had narrower wheels ready to use.  Tire temperatures, as monitored by Hoosier Racing Tire, were well within the optimal range for top performance.  As with any racing tire, tire management is the key to success and air pressure requirements, whether or not to sipe the tires, etc. are all important factors in getting the most out of the new tires.

So why was the racing so good on the new SOD tires?  Maybe the drivers who had the courage to give them a try are more skillful than people give them credit for.  Or maybe the Hoosier Racing Tire engineers were more than capable of transforming SOD’s requirements into a top performing reality.  Both probably contributed to the successful debut of the tires.  Competitors are comfortable with the new SOD tires and are saving 10% per set compared to last year’s tires and tires being run elsewhere.

Yes, there was plenty of talk about the Engine Pro Sprints On Dirt presented by ARP Hartford and Butler races, but none of it had to do with the tires.  Fans will long remember the great racing they saw the first time SOD went beyond limits.  The spec tires are destined to have a significant impact on the sport of sprint car racing for years to come.