A reminder that the deadline for Banquet tickets is next Friday October 31st. Don’t be left holding the bag after trick or treating.

The Engine Pro Sprints on Dirt Presented by ARP will complete its 35th year with the Champions Banquet set for Saturday November 8, 2014. The location for this year’s festivities will be the Holiday Inn Kalamazoo West in Kalamazoo, MI.

The cost is $35 per ticket which includes a tremendous catered. The address of the banquet facility/hotel is 2747 South 11th Street, Kalamazoo, MI 49009. Tickets are available until November 1. The hotel is also holding a block of rooms at a discounted price, the hotel website is www.holidayinn.com/kalamazoo.

To order tickets for this year’s Engine Pro Sprints on Dirt Presented by ARP banquet please contact Mike Strevel at mlstrevel@gmail.com or 616-204-0622. Tickets will be available at both the Berlin and Plymouth races also.

Trophy sponsor’s for final point positions 3 through 11 plus rookie of the year are available for $ 50.00 each.

Sponsor will receive mention at the banquet, have their name or company name placed on the trophy  and be mentioned in championship banquet press release.

The 2014 Champions banquet will be at the Kalamazoo Holiday Inn Conference Center on Saturday November 8. The hotel is at the Stadium Dr exit off of US 131 in Kalamazoo.

Banquet tickets will be available until the deadline of Nov. 1st  by contacting Mike. They are $35 each. 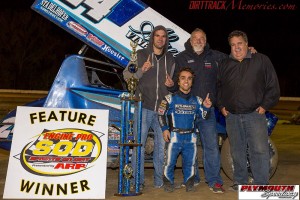 Plymouth, IN — (October 4, 2014) — In front of a frigid and dedicated Plymouth Speedway crowd ; the Engine Pro Sprints on Dirt Presented by ARP feature was picked up by Rico Abreu of Rutherford, CA who captured his first ever feature win with the Michigan based sprint car sanctioning body.

A field of 20 winged sprint cars signed in at the tricky3/8 mile oval. Ryan Ruhl lead the first 11 laps of the feature event hoping to score his first ever SOD championship only to be involved with a couple of slower cars that caused extensive front end damage to the Coldwater, MI drivers car. A red flag was thrown for the cleanup and with this short window the Ruhl team was able to make repairs and return to the race track. Ruhl restarted in the rear and over the final 14 laps Ruhl was able to work his way to an eighth place finishing position.

Wisconsin racer Scotty Thiel inherited the lead from Ruhl and held the lead and looked to be the victor of his first ever SOD feature event. However Abreu who started 10th in the feature was making his move through the field and was running third at the half way point of the feature. Abreu took second place from Ohio driver Devon Dobie on lap 17 and started his charge on Thiel. Over the next four laps an incredible battle developed between Abreu and Thiel with the two drivers exchanging the lead three times before Thiel got tangled with a lapped car and came to a stop in turn three on lap 23. Abreu restarted with the lead and held off Shawn Dancer and Dustin Daggett for the win for the final race of the 2014 season. 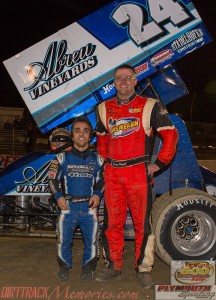 The battle for the 2014 points championship came down to the final laps with Daggett taking a third place finishing position and Ruhl digging his way back to eighth. This finish allowed Daggett to gain 19 points on Ruhl and end up with a seven point lead over Ruhl to capture his record breaking fifth series championship in the 35 year history of the group.

The top five finishers of the evening for the Engine Pro Sprints on Dirt Presented by ARP feature were- Abreu, Dancer, Daggett,Dobie and Chase Ridenour.

Heat race wins were captured by Thiel, Daggett and Dancer.

We just talked to the race director at Plymouth. The sun is peeking through the clouds and their practice is on for tonight. Saturday’s race is still on. We will post more updates as we receive them.