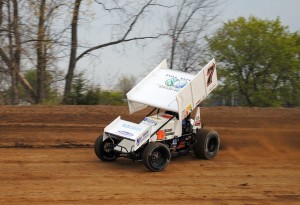 Crystal, MI – (April 28, 2012) – Darren Long made the long drive from Elida, Ohio worthwhile by picking up the feature win to kick off the 2012 Engine Pro ASCS Sprints on Dirt presented by ARP season at Crystal Motor Speedway. Long started on the pole and led every lap in route to his first victory of the 2012 season driving his family owned Gaerte powered KPC chassis.

“I knew my motor would take off really well, and the car was driving really well. On the restarts I was able to pull the wing back to drive off the corner better,” said Long. “I was trying to be real patent through the lapped traffic. I have to thank my guys that work on my team; they are doing a great job.”

Long and Brett Mann started on the front row for the 25-lap feature event. After the first start was negated by Brad Lamberson and Steve Irwin spinning off the third corner, Long got the jump at the start with Dustin Daggett moving past Brett Mann for second. Long and Daggett pulled away from the rest of the field while eight starting Jared Horstman started moving through the field into the top five by lap four.

By lap seven Long began to encounter slower traffic and allowed Daggett to close in to challenge for the lead. On lap 12 Long got held up by a slower car and allowed Daggett to pull up to his back bumper. One lap later though Long moved by two lapped cars crossing outside to inside that ended up blocking Daggett and allowed Long to open up some breathing room.

On lap 14 that advantage was erased by a pair of cautions. The first for Andy Chehowski spinning in front of the leaders in turn two, then one lap later for Dain Naida’s spin off of turn four. This allowed Daggett to move around the lapped cars between himself and Long for the restart. Long was up for the challenge though and pulled away from Daggett to open up a half straightaway lead.

Further back in the field Gregg Dalman mounted a late race charge from 13th starting position into the top five. Dalman then was able to move Ruhl and Horstman to advance to the third position with five laps to go.

Up front it was all Long blasting through the lapped traffic to take the victory over Daggett, Dalman, Horstman, and Ruhl.