Skip to content
For the sixth time in his career Dustin Daggett was crowned King of Michigan at Hartford Motor Speedway during the Engine Pro ASCS Sprints on Dirt presented by ARP Friday. Daggett moved up from his seventh starting spot to take the lead from Gregg Dalman during a mid race restart and held off a late surge by defending ASCS SOD champion Brett Mann to claim another crown. 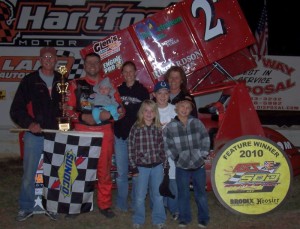 Hartford, MI. – (Friday September 10th, 2010) –
“That was not easy,” said Daggett in victory lane. “Gregg (Dalman) was running well, and so was Brett (Mann). “We had a bit of an oil leak after the dash, but my crew did a great job getting the car ready for the feature.”

Mann and Dalman started on the front row for the 25-lap King of Michigan feature. Dalman took the lead with Mann and Chad Blonde in pursuit. Daggett quickly moved up to fourth and joined the lead trio. After disposing of Blonde and Mann with impressive passes while negotiating slower traffic, Daggett slowly began to gain ground on Dalman.

With 13 laps complete the red flag appeared when Robert Huisken did a pirouette in turn three, collecting Joe Bares and Jared Horstman. Bares and Huisken were able to rejoin the field while Horstman’s car returned to the pit area on a flatbed.

Daggett dove under Dalman in turn one after the restart and took the lead. Mann disposed of Dalman for second and kept pace with Daggett through lapped traffic. On two different occasions Mann closed in on Daggett while encountering slower cars, but Daggett escaped each time before Mann could strike.

Daggett motored to the win over Mann, Dalman, Grubaugh, and Aaron Shaffer.