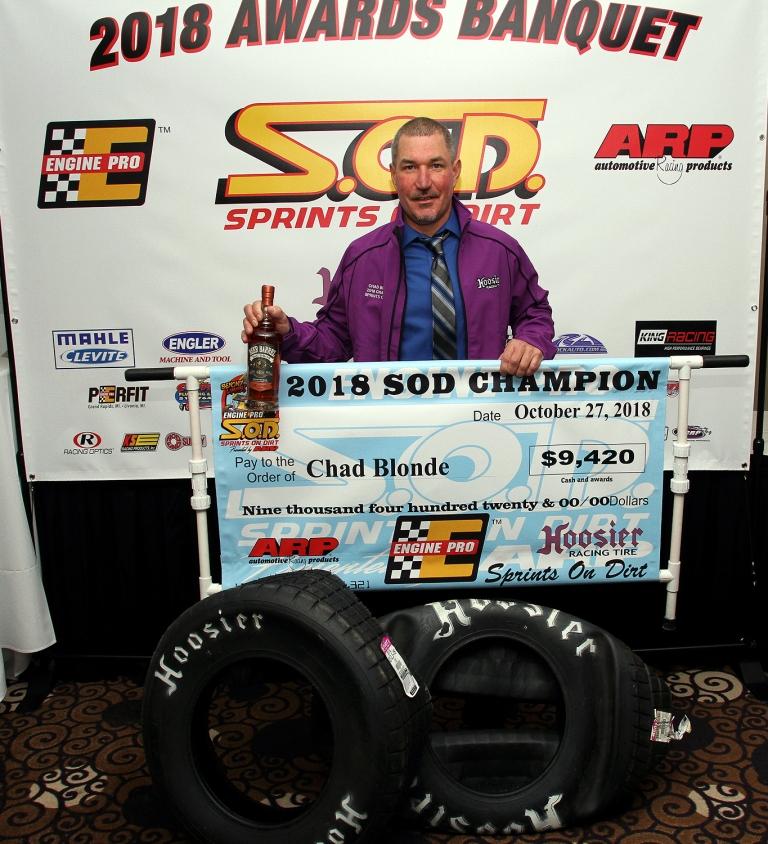 The banquet payout brought the 2018 season total for contingency cash and awards to $90,876.

Shawn Valenti won the 2018 SOD Series Rookie of the Year award sponsored by Merritt Speedway.  Shawn is extremely versatile and will race anything with four wheels on dirt.  He has enjoyed much success in Ohio & Indiana in dirt trucks and super streets as well as sprints.

XYZ Machining, Tim & Cindy Norman, recognized Justin Ward (Benzonia, MI) as this year’s Sportsman of the Year.  Justin has now been racing full-size sprints for three years and presents a level of professionalism that represents SOD well.  Justin, his father James, and brother Josh were committed to running the entire 2018 SOD schedule in spite of a lot of travel and frequent threatening weather.  Justin was presented with a MAC 24-piece hand tool set compliments of Jeff Schejbal and Noizee 1 Motorsports.

XYZ Machining, Tim & Cindy Norman, recognize Sean Robinson as this year’s crew chief of the year.  Sean made sure every time SOD champion Chad Blonde went on the track, his equipment was in top shape.  Sean quietly went about his business without any drama and SOD is honored to recognize his efforts.  Sean was presented with a MAC hammer set compliments of Jeff Schejbal and Noizee 1 Motorsports.  JohnnyB Imagery also presented Sean with a large metal print of the NEFCO Metal Sales & Fabrication 5B Maxim powered by Krieger Engines.

Checks, awards, and trophies were presented to drivers in attendance:

Hoosier Racing Tire and Hoosier Tire Midwest were recognized for their dedication and support in making the SOD “beyond limits” format successful.  Jim Coffey & Son Plumbing & Heating and Steve Smith were recognized for sponsorship of the 2018 Deuced It award that presented $100 to the 2nd place finisher in every SOD feature.

SOD marketing partners that presented awards for the banquet were:

Sprints On Dirt extends its deepest appreciation to our title sponsors Engine Pro and ARP for making it all possible.