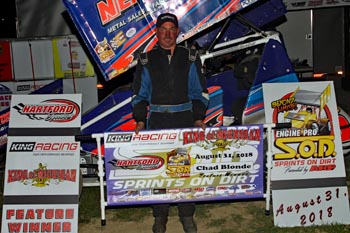 The SOD Kids Feature Draw put Shawn Valenti (Fostoria, Ohio) and Mark Aldrich (Addison, Michigan) on the front row for the feature with Blonde, the current SOD point leader, starting sixth.  Before a lap could be completed, Michael Schumacher (Constantine, Michigan) brought out the red with a turn three crash.  Blonde charged into the lead on lap 2 while fifth starter Ruhl took second on lap four.  Ruhl did everything he could to reel in the leader, but Blonde was strong, holding onto a narrow lead as they weaved through lapped traffic and held on to win by less than two-tenths of a second.  Both Blonde and Ruhl utilized Krieger Racing Engines powered Maxims.

Zane DeVault (Plymouth, Indiana) led all qualifiers after returning to SOD competition.  DeVault picked up his first SOD victory on April 28 at Crystal Motor Speedway before sitting out most of the season due to an injury.  For the third time in 2018, Quentin Blonde (Litchfield, Michigan) was the KSE Hard Charger with +7.

As 2018 King Engine Bearings King of Michigan, Blonde will received $1,000 at the Sprints On Dirt Awards Banquet on October 27.  Also collecting part of the point fund will be Shawn Valenti, Jay Steinebach, Dustin Shriver, and Ricky Ferkel.