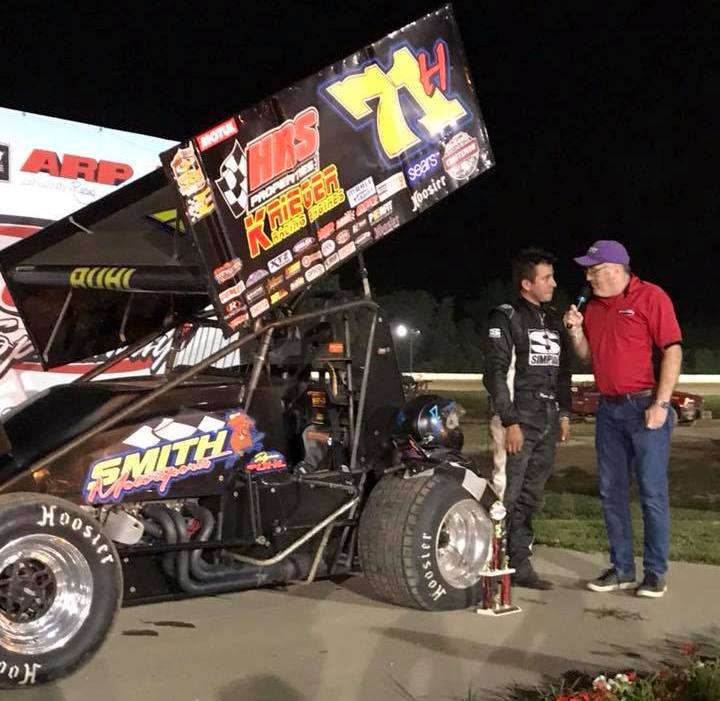 ERIE, MI (July 7, 2018) – After being rained out twice, the third attempt proved to be a charm for the Engine Pro Sprints On Dirt race #1 of the King Engine Bearings King of Michigan at Hartford Speedway Friday night.  It was Ryan Ruhl’s night to rule in his Krieger Racing Engines powered Maxim as he was the Lane Automotive/MSD Ignitions Faster Master in qualifying for his heat, won the RockAuto.com heat race, won the feature, then proposed to long-time girlfriend Courtney Squires in victory lane to the delight of the large, enthusiastic crowd.

Fastest qualifier and Engler Machine & Tool heat race winner Chad Blonde started on the pole after Braxton drew the number one pill in the King Engine Bearings Kids Feature Draw.  Third place starter Brett Mann got out of shape in turn one of the first lap after a tire bleeder stuck and Eli Lakin got caught up in the melee and flipped, ending the race for both.  On the restart, Michael Schumacher came to a stop in turn three with a shredded right rear tire.

Once back under green, Blonde looked like he was in control as he masterfully negotiated traffic, to maintain a twenty-car lead over Ruhl who started fourth and moved into second on lap two.  A caution on lap ten gave Ruhl (Coldwater, MI) a chance to deal with Blonde on an open track and he shot under Blonde to take the lead on lap 11.  Although Blonde stayed close to Ruhl for a few laps, the lead grew throughout the race and a caution resulting in a green, white, checkered finish was no problem for Ruhl who stuck to his mid to low line to take the win.  A few more laps may have proven disastrous for Ruhl as his left rear tire was slowly losing air and victory lane photos showed just how low the tire was; it eventually went flat in post-race celebration.

It was an interesting race that demonstrated the success of SOD’s “Beyond Limits” format utilizing Hoosier spec tires.  Winner Ruhl and second-place Blonde were powered by 410s and third-place Gregg Dalman and fourth-place Andy Teunessen had 360 motors.

It was announced that a date has been added for Sprints On Dirt at Hartford Speedway, Friday, August 10 for a race sponsored by Ti22 Performance.  SOD also returns to Hartford Speedway for already scheduled KoM dates July 13, July 27, and August 31.1