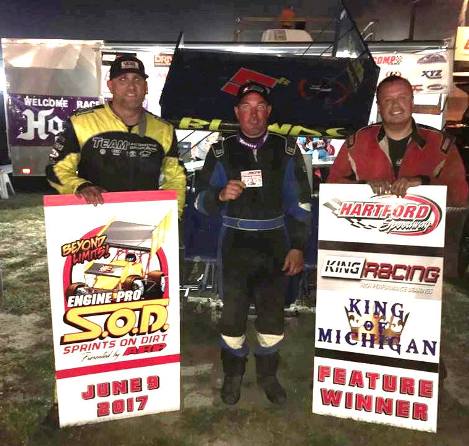 In a night of firsts, Engine Pro Sprints On Dirt presented by ARP made their maiden appearance on the newly reconfigured Hartford Motor Speedway 3/8 mile oval, and the show, before a huge crowd, was a real hit.  Chad Blonde, winner of the last SOD feature on the old track configuration last September, charged to his first win of the season in the first of four King Engine Bearings King of Michigan 2017 races.

After battling rain for most of May, Hartford Speedway owner Tim Dibble and his track crew now had a sunny, hot, and windy race day to contend with.  Through their hard work, they were able to get the new clay surface under control.

The night started out with Chad Blonde, Joe Swanson, and Boston Mead winning the Lane Automotive/MSD Ignition Fast Master awards as fast qualifiers in their respective heat race qualifying sessions.  Unfortunately for 17-year-old Mead, his night was over due to engine problems.

Gregg Dalman showed early speed, leading flag to flag in the Engler Machine & Tool heat race from the pole position.  Mark Aldrich took the the COMP Cams heat race after the original start was called back. On the second start, point leader Dain Naida made heavy contact with the turn 3 wall ending his night early.  Thirteen-year-old Andrew Scheid lead the entire RockAuto.com heat race on his way to his first SOD race win.

After a complete restart for the King Engine Bearings King of Michigan 25-lap feature, Blonde wasted little time charging into the lead from 3rd and driving away from the field.  The red flag flew on lap 7 when Brett Man flipped hard in turn 3.  Back under green, Blonde drove off to a convincing 10-second win over Chris Gurley and Jay Steinebach.  Joe Swanson took 4th and top SOD sprint car rookie contender Andrew Scheid came home 5th.