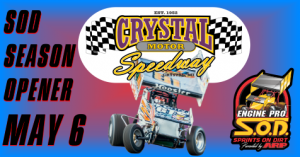 For the second year in a row, Mother Nature won out in the Engine Pro Sprints On Dirt presented by ARP season opener at Crystal Motor Speedway yesterday.

Track owner/promoter Ron Flinn agonized over making the right decision on the day where the early forecast was dubious at best and the later forecast was one of impending doom.  With many SOD competitors and fans facing several hours travel time to the race and the forecast, Flinn notified SOD at 10:30 AM that he was pulling the plug.

Flinn’s decision proved to be the right one, as late afternoon conditions would have rendered even the best prepared track surface unraceable.  By early evening, continuous, heavy rain had moved in, and even now, over 13 hours later, Crystal continues to be pounded with rain and it is predicted not to stop until 9:00 AM tomorrow morning.

Flinn had the foresight to plan a rain out date for the always popular Sprints On Dirt, and next Saturday, May 6, is the date.

On behalf of the entire family of SOD competitors, fans, and friends, SOD management thanks Ron Flinn for his timely decision to call off the race program under difficult conditions.

Want to know more about Crystal Motor Speedway?  Go to www.crystalmotorspeedway.com and on Facebook at www.facebook.com/CMSpeedway.