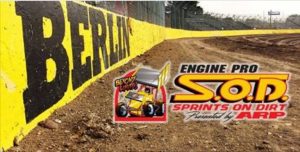 Dirt track racing returns to Berlin Raceway this year in spectacular fashion with the Engine Pro Sprints On Dirt presented by ARP ready to write an exciting new chapter in the track’s storied 67-year history.

Berlin Raceway’s mystique and SOD viewed as the nation’s most progressive and talked-about regional sprint car series promise to make the race an event fans won’t want to miss.  T. J. Bufferbarger (www.tjslideways.com) wrote: “With Berlin’s rich history combined with state of the art amenities for race fans, Michigan sprint car racing can end its season at the state’s nicest facility for short track racing. This is a win/win for everyone involved and a welcome addition to my schedule for the 2017 season.”