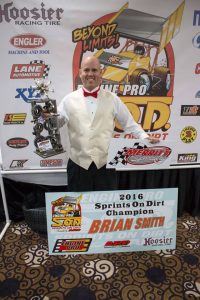 The Engine Pro Sprints On Dirt presented by ARP 2016 Awards Banquet took place at the Battle Creek (MI) Holiday Inn on Saturday, November 5.  A night packed with light-hearted fun and heavy-weight awards capped off a great 2016 season with the crowning of Brian Smith as champion. 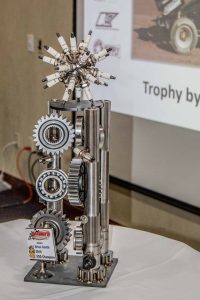 The drivers honored at the banquet will forever be remembered as those who made the new, unlimited Sprints On Dirt one of the most memorable changes in sprint car racing history.

Each year, Engine Pro recognizes the Engine Builder of the Year award for its high level of craftsmanship and dedication to the Sprints On Dirt racing community.  The 2016 recipient is Gressman Powersports from Fremont, Ohio.  Gressman is the engine builder for SOD Champion Brian Smith. 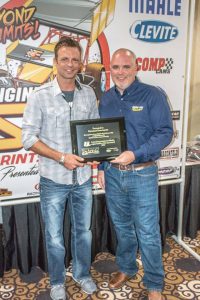 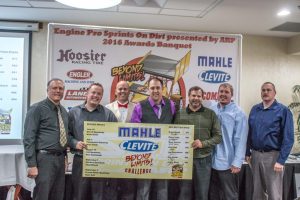 The five-race 2016 MAHLE/Clevite Beyond Limits Challenge mini-series gave SOD competitors an opportunity to compete for a separate point fund within the full SOD season series.  The final standings for the BLC Championship are:

The top twelve SOD competitor members in points were introduced and presented with trophies and awards by Lexi Adgate. 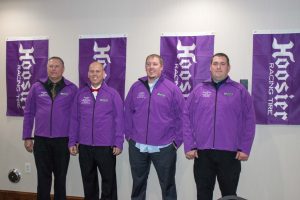 SOD recognized RacingAwareness.com for its efforts RacingAwareness.com and Racing Awareness Inc. are two separate entities that were created with the sole intent of providing children and their families from Helen DeVos Children’s Hospital, of West Michigan, who are experiencing or have experienced an illness or injury of a child, a diversion from the healthcare process utilizing the sport of auto racing.  Banquet trophies and awards presenter Lexi Adgate was one of the original kids that Racing Awareness “adopted.”

Attendees were presented with a few facts about the 2016 season.  There were five rain outs and threatening weather on five other dates, but the first season under the new unlimited format was still a great success.  Car counts were equal to 2015 in spite of several no-shows due to weather. The on-track product was exceptional with only one spin out for every 986 laps run.  Seven drivers, Brian Smith (3), Ryan Ruhl (2), Chad Blonde, Stuart Brubaker, Steve Irwin, Max Stambaugh, and Doug Zimmerman, won features.

In spite of only ten events completed, competitors were well rewarded.  Brian Smith was awarded $6,440 in cash and awards.  $1,295 in cash and awards was the least amount awarded to the member drivers present.  Engine Pro Sprints On Dirt presented by ARP awarded competitors $41,110 above and beyond purse payouts in 2016.

Engine Pro Sprints On Dirt presented by ARP would like to thank everyone whose extra effort made the banquet a perfect close to the 2016 season. Thank you to Motor City Racing Promotions Scott Menlen and Laura Tucker for set-up and tear-down.  Thank you to Pat Holzinger and Kathie Naida for handling registration.  Thank you to Wendy Rominger and the staff of the Battle Creek Holiday Inn for their superb facilty and services.  Thank you to Thomas Michael for photographing the banquet.  A very special thank you also goes out to Lexi Adgate for her hard work in distributing the cash and contingency awards.