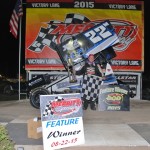 Merritt, MI — (August 22, 2015) — Dan McCarron picked up his first career feature win in the Engine Pro Sprints on Dirt presented by ARP feature Saturday night at Merritt Speedway.  Andy Teunessen jumped into an early lead from his 2nd place starting position while pole sitter, Brad Lamberson, retired early due to mechanical issues.  Teunessen maintained the lead until lap 18 when he got high coming out of turn four and Gregg Dalman was able to pass him for the lead.  In the meantime, McCarron had worked his way up to 3rd and was challenging the two front runners for the lead.  As the leaders were working through heavy lapped traffic, McCarron was able to slip by both Teunessen and Dalman on lap 20 to pick up the win.  Gregg Dalman, Andy Teunessen, Kyle Pitts, and Craig Karazim rounded out the top five.  Heat race winners for the field of 22 cars were Dan McCarron, Robert Huisken and Brad Lamberson.