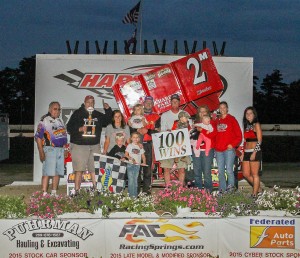 Dustin Daggett stormed to a milestone 100th Engine Pro Sprints on Dirt Presented by ARP victory with a thrilling 25 lap victory at Hartford Speedway Friday night after a ferocious battle with Ryan Ruhl after a late caution.

With a light rain trying to interrupt things, the feature was lined up with Ruhl and Brett Mann making up the front row. At the green, Ruhl shot out front with 3rd starting Daggett running side by side early with Brett Mann falling in line 3rd.

Lap four found Kirk Cheney getting over the turn four cushion and hard into the wall upside down. Cheney was able to get out on his own to cheers from the crowd. As the green flew again Daggett dive bombed low under Ruhl, but the #16 would have none of it opening a wider lead.

Meanwhile, with Ruhl and Daggett putting distance between themselves and Mann in third, racing was intense for fourth with a strong Andy Teunessen, Gregg Dalman, Chase Ridenour, and Brad Lamberson all battling hard.

While the lead duo were maneuvering high and low through heavy lapped traffic, laps were quickly winding down. Lap 22 saw the #18 of DJ Lemance encounter some trouble and slowed on the front stretch and attempted to get off the track but spun to a stop to close to the track for racing to continue bringing out the caution.

The green appeared for the final time with three to go and Ruhl jumped out front but going into three, Daggett dove under Ruhl to take the lead. Ruhl pulled even and the pair crossed the stripe even with two to go. The final two laps were a dogfight with Daggett getting a slight advantage and taking the checkers to the approval of a very large crowd.

At the checkers it was Daggett, Ruhl, Mann, Teunessen and Dalman. Heats for the 22 cars on hand were won by Daggett, Mann and Ruhl. In victory lane, an excited Dustin Daggett thanked his car owner Phil Mott and his family for Sprints on Dirt win #100. He also claimed Ryan Ruhl had the race won until the late caution and praised him for the hard racing.