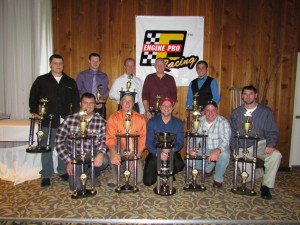 Daggett, the racer who has the most feature victories in the 34 year history of the winged sprint car group thanked his car owner Phil Mott and the incredible crew that helped him capture the 2013 championship.

A total of eleven different drivers were awarded with trophies and a share of the $20,000 cash point fund. After an opening video presentation celebrating the past year, Engine Pro  Sprints on Dirt Series Director Mike Strevel gave a short review of the 2013 season and then it was time to award the top eleven point finishers, the 2013 rookie of the year and several special awards to cap the 34th season for the Michigan based sprint car group.

There were several scheduling announcements that were  near the end of the presentation. The first was that for the 34th year Crystal Motor Speedway will host the series on three occasions including the traditional opener in April. The second is that the Berlin Raceway in Marne MI will host the series on Saturday September 27. It was announced that a total of 23 events are scheduled for 2014 with 2-4 still to be added.

Awards that were presented Friday evening include the following-

2013 Driver of the Year- Dustin Daggett