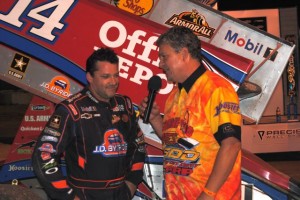 Stewart led all 30-laps of the feature event on his way to victory, but the last five laps were side by side swapping lines with Ryan Grubaugh. On the final lap Stewart protected the bottom while Grubaugh motored to the top, shooting off the end of the track onto the larger paved oval. Grubaugh salvaged a fourth place finish.

Steve Irwin and Stewart started on the front row of the 30 lap main event. Stewart took the lead from the start while current ASCS SOD point leader Gregg Dalman moved into second spot around Irwin. Dalman stayed close to Stewart through the first portion of the race when Nate Bostrum spun in turn two with four laps in.

Stewart was able to pull away during the restart and open up a sizeable advantage. This is when Grubaugh began his charge from 12th starting position after having to run the B-Main event after failing to go to the scales following his heat race event. Grubaugh started motoring around the top side of the 1/5th mile oval and broke into the top five by 12 and was up to fourth position on lap fourteen when the caution flew for Jay Steinbach spinning off turn three.
The caution helped close the gap Stewart had opened up vanished for the restart. Grubaugh went right to the top and took over third on lap 17 from Irwin and then battled with Dalman for the second spot. Grubaugh passed Dalman on lap 20 and began his pursuit of Stewart.

Meanwhile Stewart was mired in heavy lapped traffic. It was the opportunity Grubaugh needed as he closed quickly on the 2011 NASCAR Nextel Cup Champion. With three laps to go Grubaugh made his move and got the bottom away from Stewart in turns one and two. Stewart managed to hold onto the lead as the duo exchanged lines racing side by side over the final two laps.

On the final lap Stewart held the bottom while Grubaugh went to the top line he had used so well throughout the race. Going into turn three Grubaugh banged the cushion and drove off the end of the race track. Stewart went on to win while Dalman and Irwin claimed second and third position. Grubaugh and Ryan Ruhl rounded out the top five.