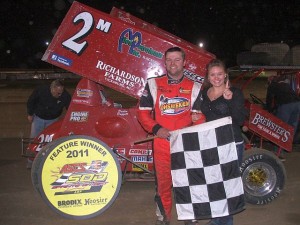 “That was so much fun racing side by side with (Mann),” said Daggett in victory lane. “If you didn’t like that race you must not like racing. It was a great way for us the clinch the championship.”

Gregg Dalman and Davey Brown started on the front row for the 25-lap feature event. Dalman led off turn two while Brett Mann moved into the second spot. That duo opened up some sizeable distance between themselves and the rest of the field while Dustin Daggett, Dain Naida, and Jamie Collard raced for third through fifth.

Daggett moved past Naida on lap four to take the fourth spot while Collard and Mann raced for the second spot. Dalman opened up about a five car length lead as he approached slower traffic. Daggett then went to the outside of Collard to take third in turn three. Collard crossed back over, but could not retain the position off turn four.

By lap seven Dalman started catching slower traffic and allowed Mann to close with Daggett close behind. Daggett got a look under Mann, but was blocked by a slower car. Soon the top three cleared slower traffic and were right together on the race track.

Then on lap 10 Mann found an opening and slid by Dalman for the lead, one lap later Daggett moved past Dalman for second and closed in on Mann to challenge for the lead. From the next four laps Daggett and Mann swapped the lead in every corner until the caution flew for Collard, who ended up backwards in turn one with front end damage. Collard was unable to continue.

Daggett held the lead during the restart, but was immediately under pressure from Mann. Mann was better in turns one and two and could get along side or by Daggett, but each time Daggett was better off turns three and four and would retain the lead at the start finish line.

With five laps to go Mike Daggett and Joe Bares tangled in turn two to bring out the caution flag. Both drivers went pit side after the incident.

Mann mounted one last challenge, but Daggett was able to pull away while Mann tried holding off Dalman for second. Daggett held on to win over Mann, Dalman, Naida, and Jared Horstman.

B-Mains (Top two finishers transferred to the “A” Feature)