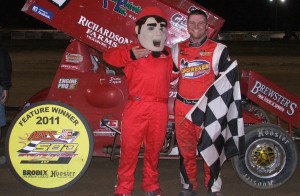 Daggett Dominates ASCS Sprints on Dirt at I-96!

T.J. Buffenbarger, LAKE ODESSA, Mich. (June 18, 2011) – Dustin Daggett completed a dominating performance at I-96 Speedway Saturday night by winning the main event and lapping up to second place. Daggett started sixth and after a tremendous start took the lead on lap two and never looked back.

“I’m not sure if it was the shock setup we had on the car or what, but it was really hooked up tonight,” said Daggett in victory lane. “I want to thank Miles Petroleum for helping put on the show at I-96 and my car owners Phil and Marty Mott for giving me this great opportunity.”

Robert Huisken and Joe Bares started on the front row for the 25-lap feature event. Bares moved into the lead on lap one with Daggett up to second. Daggett took the lead on the second circuit while Horstman dispatched Bares back to third while trying to keep pace with Daggett.

Behind the leaders Bears Gregg Dalman, Ryan Grubaugh, and Huisken raged a torrid battle for third position. Bares eventually pulled away from the dual while Rutan joined in. Then with 18 laps in Grubaugh suffered front end damang and pulled off the track without drawing a caution.

Horstman kept Daggett in sight through lapped traffic until lap 13 when Daggett made a daring three wide pass to open up a sizeable gap between himself and Horstman. Even with over a half track advantage Daggett never let up and lapped up to second with two laps to go. Daggett crossed the finsh line nearly ¾ of a lap ahead of Horstman, Bares, Ben Rutan from 11th, and Gregg Dalman.

Dustin Daggett, Ken Mackey, Mike Daggett, and Horstman won heat race events. Rutan won the dash after Blake Nimee penalized for jumping the start while Tim Champlin won the B-Main. Trey Smith flipped in hot laps, but his team was able to make repairs in time for Smith to compete in his heat race.