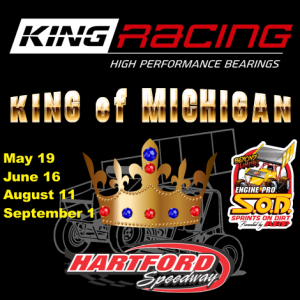 King Engine Bearings has signed on as the title sponsor for the prestigious Engine Pro Sprints On Dirt presented by ARP 2017 King of Michigan at Hartford Speedway.

When confirming the partnership, Phillip Data, National Sales Manager for King Engine Bearings, wrote: “We are very excited to partner with the prestigious Engine Pro Sprints on Dirt and the fantastic racing venue at the Hartford Speedway. The Engine Pro Sprints on Dirt is truly one of the most exciting race series around and has been one of the premier sprint car racing sanctioning organizations for 38 years. The Hartford Speedway is a top of the line venue and their new track configuration promises to be a real crowd pleaser. The 2017 season looks to be the best yet and we are so excited to be a part of the fast paced action.”

The King of Michigan had long been a SOD tradition as a single race before 2016, but has now been expanded to include all four 2017 SOD races at Hartford Speedway.  The King Engine Bearings King of Michigan returns bigger and better with heightened excitement about the newly reconfigured 3/8 mile track and the expanded schedule.  The 2017 KoM Champion will be crowned at the series finale on September 1.

The King Engine Bearings King of Michigan will pay a point fund that will award $1,000 to the series champion.  In addition, the champion will have a guaranteed starting spot in the Engine Pro Sprints On Dirt presented by ARP Mike Olrich Memorial Race at Crystal Motor Speedway on September 2nd.

The King Engine Bearings team are bearing specialists. King Engine Bearings was founded in 1960 with one simple objective: to supply the highest quality bearings available in the marketplace. By specializing in engine bearings, King has built an extensive product offering that includes a wide range of engine bearings for automobiles, light duty and heavy duty trucks, marine, aviation, standby power and many other types of internal combustion engines. Every King bearing utilizes the highest quality materials and the most advanced designs to ensure complete customer satisfaction.